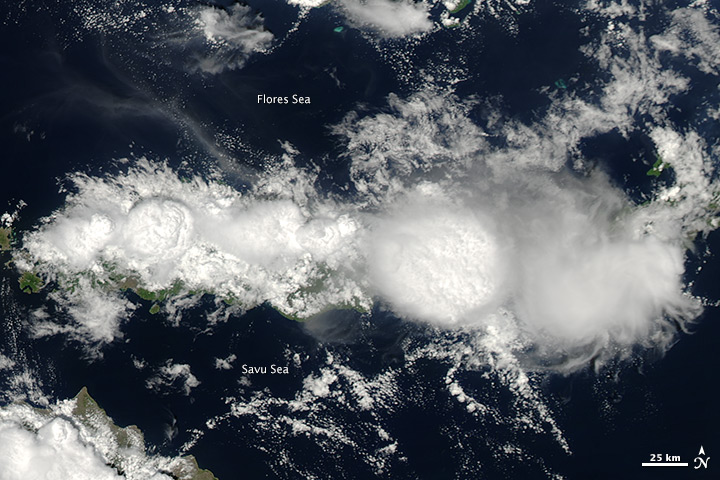 In a view from high altitude, height can be a difficult thing to gauge. The highest of clouds can appear to sit on a flat plane, as if they were at the same elevation as the ocean or land surface. In this image, however, texture, shape and shadows lend definition to mushrooming thunderheads over the Indonesian island of Flores. The Moderate Resolution Imaging Spectroradiometer (MODIS) on NASA’s Aqua satellite acquired this image on the afternoon of December 2, 2013.

The towering clouds are so well defined that it is easy to visualize the rapidly rising air that is fueling them. “This looks like a classic example of island convection that is enhanced by topography,” says NASA scientist Joseph Munchak.

During the day, sunlight heats the land more quickly than it heats the ocean. The warm air over land rises, creating an area of low pressure that pulls in cool air from the ocean. The result is a sea breeze. On this Indonesia island, the sea breeze from the Flores Sea on the north blows inland and clashes with the sea breeze blowing inland from the Savu Sea in the south. When the two breezes meet in the center of Flores, they push the air up. The rising air cools and condenses into a line of clouds.

Sea breeze convection is not the only force at work here. On Flores, cloud formation has help from the shape of the land. A line of tall volcanoes runs down the spine of the island, and their steep slopes also force air to rise. So, moist ocean air blows inland, hits the mountains and volcanoes and rises with the slope. Above the mountains, the rising air meets the rising sea breeze from the other side, and the upward motion is reinforced.

The combination of the two forces pushes air high into the atmosphere, resulting in large towering clouds of the sort that usually produce thunderstorms. In fact, a weather station on Flores reported rain and thunderstorms on December 2. This type of convection is strongest in the early afternoon, says Munchak, just about the time when Aqua MODIS acquired the image. The clouds were just beginning to form when Terra MODIS passed over earlier in the day.