Sizing up the Landslide at Bingham Canyon Mine 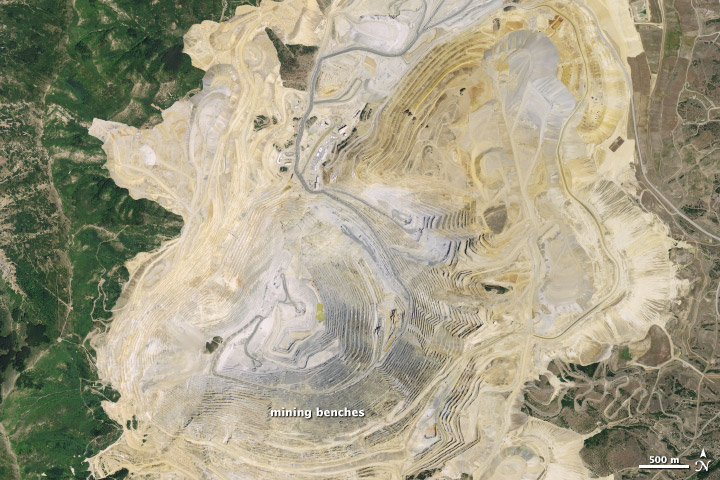 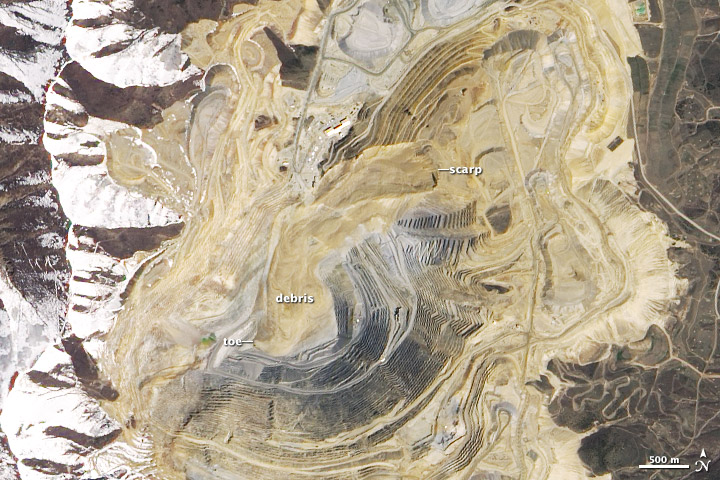 The Bingham Canyon Mine is one of the largest open-pit mines in the world, measuring more than 4 kilometers (2.5 miles) wide and 1,200 meters (3,900 feet) deep. Located about 30 kilometers (18 miles) southwest of Salt Lake City, Utah, the mine is a major producer of copper, gold, silver, and molybednum.

On April 10, 2013, Bingham Canyon also produced the largest, non-volcanic landslide in the history of North America when 65–70 million cubic meters of dirt and rock thundered down the side of the pit. The event was large enough that seismic networks designed to record earthquakes detected the rumble of sliding debris.

The event—known as a rock avalanche among geologists because of its size and how rapidly the debris slid—was larger than both Canada’s Mount Steele slide in 2007 and Alaska’s Mount Stellar slide in 2005. Both had volumes of about 50 million cubic meters. Following the 2008 Wenchuan earthquake in China, the Daguangboa landslide put more than 1 billion cubic meters of material in motion. And long before humans were around to witness it, an extraordinary 3,400 billion cubic meter event transformed Wyoming’s Heart Mountain. That event, which occurred 40 million years ago, is thought to be the largest landslide on Earth.

The Advanced Land Imager (ALI) on NASA’s Earth Observing-1 (EO-1) acquired this view (bottom) of Bingham Canyon Mine on May 2, 2013, three weeks after the event. For comparison, an aerial photograph (top) from the National Agriculture Imagery Program (NAIP) shows what the mine looked like on July 20, 2011. A scallop-shaped scarp—a cliff-like layer of exposed soil—is visible near the origin of the slide. The trail of debris stretches about 2.5 kilometers from crest to toe. The slide obliterated or covered numerous terrace-like mining benches along the side of the pit. Rubble also damaged a number of hauling trucks that were parked near the debris toe, as well as a hauling road that runs to the bottom of the pit.

While the size of the slide was unexpected, the timing was not. The company that operates the mine had installed an interferometric radar system months before the event that made it possible to detect subtle changes in the stability of the pit’s walls. Signs of increasing strain prompted the mine’s operators to issue a press release seven hours before the collapse, with a warning that a landslide was imminent. All workers were evacuated and production had stopped before the landslide occurred; as a result, no one was injured.

“The main lesson to be learned is that large rock slope failures like this are not unpredictable ‘acts of God.’” noted University of Utah geologist Jeffrey Moore in an email. “They typically show many precursory warning signs, and with the right monitoring system and proactive approach, the time of failure can be forecasted with reasonable accuracy. This is a real success for the mine and a lesson to others in the community.”

A massive landslide occurred at Utah’s Bingham Canyon Mine on April 10, 2013. It was the largest non-volcanic landslide on record in North America.