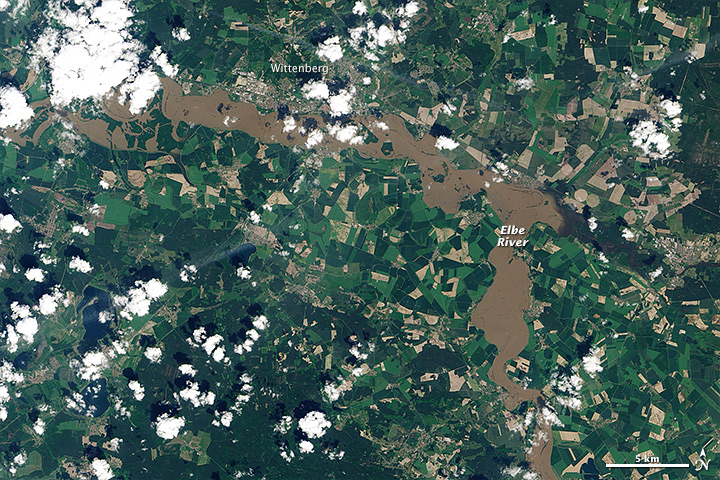 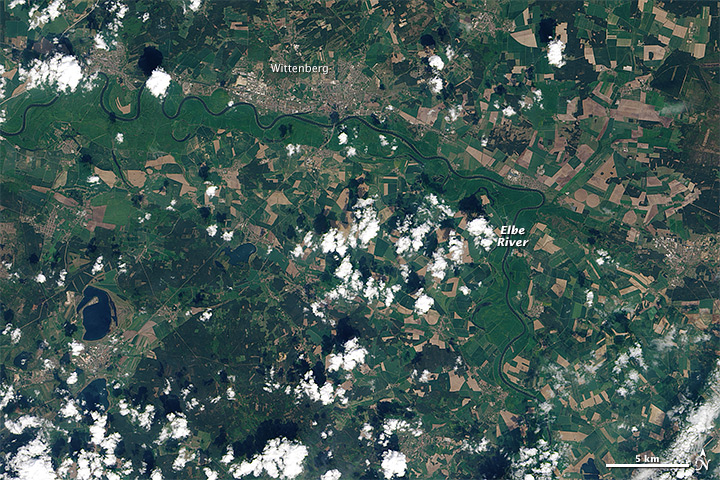 Unprecedented rainfall and flooding continued to plague central Europe in mid-June 2013, causing billions of dollars in damage. The Elbe, Danube, Saale, and other river systems rose well above their banks and breached flood defenses in Germany, Austria, the Czech Republic, Hungary, and Slovakia. Many news outlets and some government sources were describing it as the worst flooding since medieval times, surpassing the devastating floods of 2002 in many areas.

On June 7, 2013, the Operational Land Imager on Landsat 8 captured a natural-color image (top) of flooding near Wittenberg, in the German state of Saxony-Anhalt. For comparison, the lower image shows the same area on May 6. Note how the green floodplain around the river in the May image is completely inundated with muddy water in the June image. Puffs of white cumulus clouds are sprinkled across each image.

At the time of the June 7 image, the river stage stood at 6.7 meters (about 22 feet) in Wittenberg. On June 11, 2013, police shut down the center of Wittenberg as crews worked to shore up sandbag dikes and other defenses. The Elbe River was expected to crest again near the city, following another rainfall over the weekend. Downstream in Magdeburg, the surging river had already burst a dam and forced evacuations.

According to the Austrian Meteorological Agency (ZAMG) and meteorologist Jeff Masters, several months worth of typical rainfall soaked southern Germany and western Austria between May 29 to June 6. That precipitation landed on soil that was already soaked from above-average spring rains.

Rising waters spilled onto flood plains and into cities across Germany. Central Europe has endured its worst flooding since medieval times. 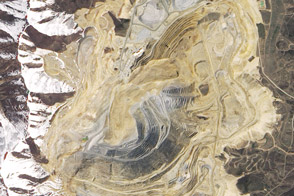 Flooding in Germany and the Czech Republic