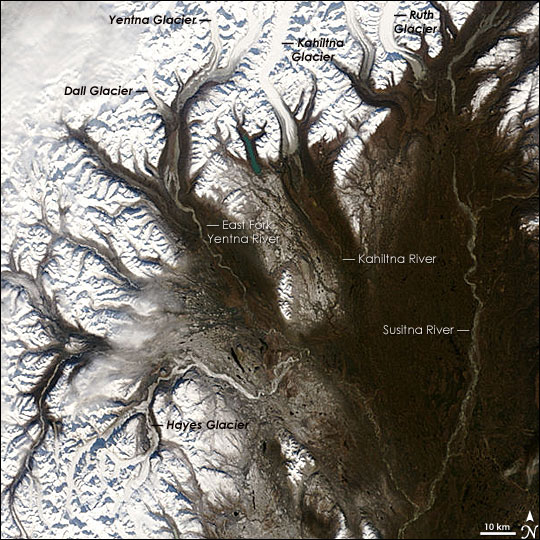 Winter may have been more than two months away when the Moderate Resolution Imaging Spectroradiometer (MODIS) on NASA’s Terra satellite captured this image on October 7, 2007, but the Alaska Mountains of south-central Alaska were already coated with snow. Purple shadows hang in the lee of the peaks, giving the snow-clad land a crumpled appearance. White gives way to brown on the right side of the image where the mountains yield to the lower-elevation Susitna River Valley. The river itself cuts a silver, winding path through deep green forests and brown wetlands and tundra.

Extending from the river valley, like branches and twigs off the trunk of a winter-bare tree, are smaller rivers that originated in the Alaska Mountains. The source of these rivers is evident in the image. Smooth white tongues of ice extend into the river valleys, the remnants of the glaciers that carved the valleys into the land. Most of the water flowing into the Gulf of Alaska from the Susitna River comes from these mountain glaciers. Glacier melt also feeds glacier lakes, only one of which is large enough to be visible in this image. Immediately left of the Kahiltna River, the aquamarine waters of Chelatna Lake stand out starkly against the brown and white landscape.

Daily images of southern Alaska are available from the MODIS Rapid Response System.