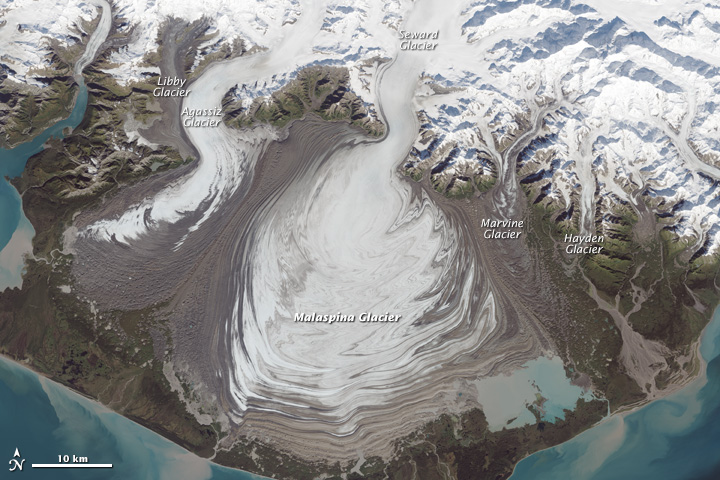 The ice of a piedmont glacier spills from a steep valley onto a relatively flat plain, where it spreads out unconstrained like pancake batter. Elephant Foot Glacier in northeastern Greenland is an excellent example; it is particularly noted for its symmetry. But the largest piedmont glacier in North America (and possibly the world) is Malaspina in southeastern Alaska.

On September 24, 2014, the Operational Land Imager (OLI) on Landsat 8 acquired this image of Malaspina Glacier. The main source of ice comes from Seward Glacier, located at the top-center of this image. The Agassiz and Libbey glaciers are visible on the left side, and the Hayden and Marvine glaciers are on the right.

The brown lines on the ice are moraines—areas where soil, rock, and other debris have been scraped up by the glacier and deposited at its sides. Where two glaciers flow together, the moraines merge to form a medial moraine. Glaciers that flow at a steady speed tend to have moraines that are relatively straight.

But what causes the dizzying pattern of curves, zigzags, and loops of Malaspina’s moraines? Glaciers in this area of Alaska periodically “surge,”meaning they lurch forward quickly for one to several years. As a result of this irregular flow, the moraines at the edges and between glaciers can become folded, compressed, and sheared to form the characteristic loops seen on Malaspina. For instance, a surge in 1986 displaced moraines on the east side of Malaspina by as much as 5 kilometers (3 miles). 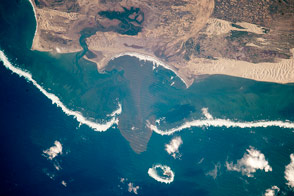