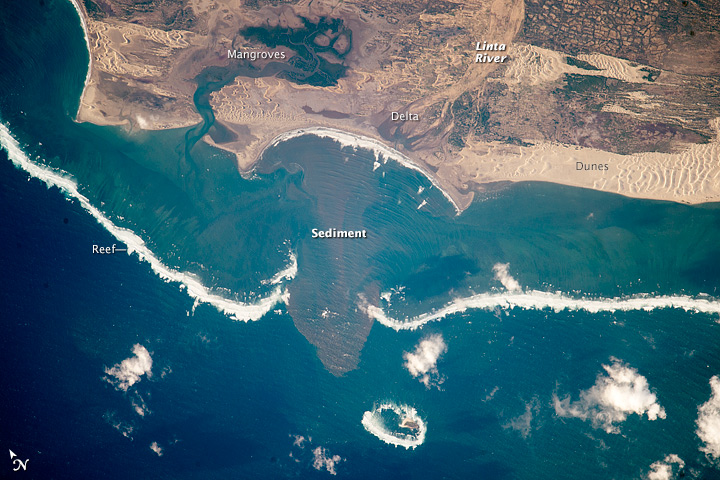 An astronaut on the International Space Station used a long lens to shoot this photograph of the complex shoreline near the Linta River delta in southern Madagascar. Waves break far offshore (2.25 kilometers or 1.4 miles) against a long line of coral reefs. A gap in the reef indicates where the river once flowed during ancient times of lower sea level, when the shoreline was far to the southwest from its present position.

The Linta River was barely flowing when this image was taken during the winter dry season. The beach completely blocks the mouths of the delta. (In contrast, a recent flood slightly to the north showed red sediment being transported far out to sea, as seen in another image captured by astronauts.) Waves breaking on this beach distribute a tongue of reddish river mud—derived from the Linta sediment—well beyond the reef into the Mozambique Channel. Tendrils of dark, clearer water can be seen exiting the bay near the mangrove wetlands.

Up and down the shoreline, light-toned dunes cast shadows in the late afternoon sun. Winds build the sand dunes by blowing sand out of the Linta River bed. The bigger dune field (right) is also fed by sand moving from another delta (out of the picture to the right). Just inland, numerous blocky agricultural fields occupy earlier dune fields.

Astronaut photograph ISS044-E-27240 was acquired on August 1, 2015, with a Nikon D4 digital camera using an 1150 millimeter lens, and is provided by the ISS Crew Earth Observations Facility and the Earth Science and Remote Sensing Unit, Johnson Space Center. The image was taken by a member of the Expedition 44 crew. The image has been cropped and enhanced to improve contrast, and lens artifacts have been removed. The International Space Station Program supports the laboratory as part of the ISS National Lab to help astronauts take pictures of Earth that will be of the greatest value to scientists and the public, and to make those images freely available on the Internet. Additional images taken by astronauts and cosmonauts can be viewed at the NASA/JSC Gateway to Astronaut Photography of Earth. Caption by M. Justin Wilkinson, Texas State University, Jacobs Contract at NASA-JSC.

An astronaut shot this photograph of a complex shoreline environment in southern Madagascar.