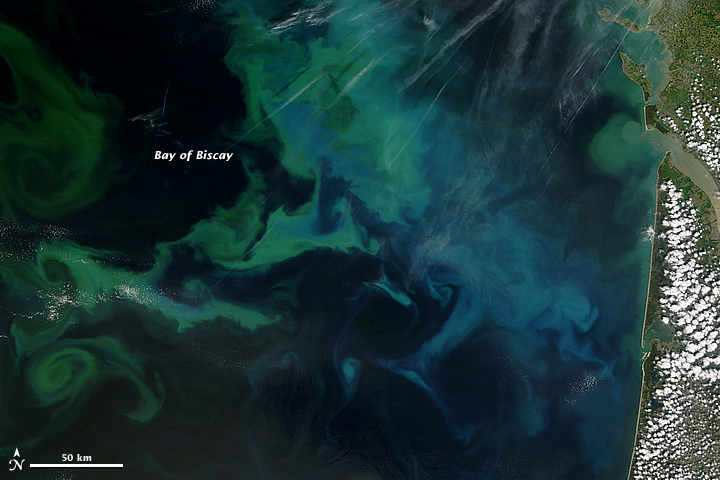 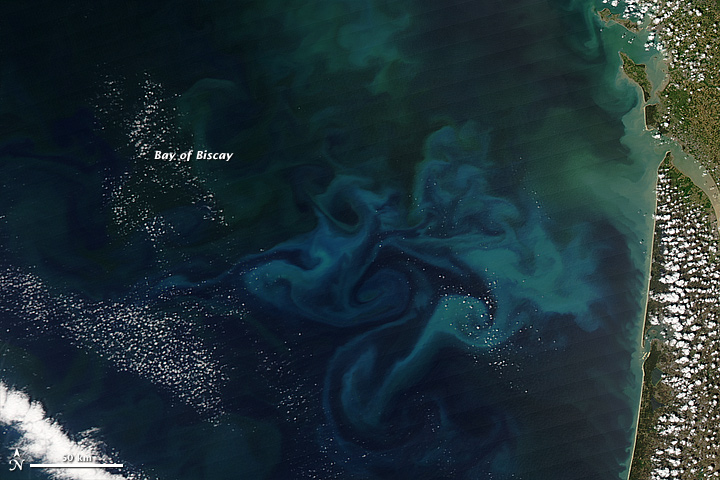 Springtime has brought a substantial and long-lasting bloom of phytoplankton in the Bay of Biscay, off the western coast of France. Swirls of green, turquoise, and cyan on the water surface show the location of these microscopic, plant-like organisms, while also tracing the currents and eddies that mix them.

Phytoplankton are always present in the water but the stronger sunlight of the season—as well as pulses of nutrient-rich sediments and fresh water flowing out from the land—promote prodigious blooms that can last for weeks to months. Blooms can be a blessing to other marine species, as these tiny floating plants often feed everything from zooplankton to fish to whales. But some algae and plankton blooms can turn dangerous, either through the production of chemical toxins or by severely depleting the oxygen supply in the ocean and creating “dead zones” that suffocate marine creatures.

NASA satellites captured these natural-color images of a phytoplankton-filled Bay of Biscay in the spring of 2013. The Moderate Resolution Imaging Spectroradiometer (MODIS) on the Terra satellite captured the top image on May 4. The MODIS instrument on Aqua acquired the bottom image on April 20. A third image of the bloom (April 25) is available by clicking here. Note how the bloom appears to progress further offshore.

Such blooms tend to occur every March and April in the area, diminishing in May as ocean conditions change and surface nutrients run out. The colors of the blooms are mostly derived from the pigments in the phytoplankton, which use chlorophyll to turn sunlight into fuel (photosynthesis); some of the color is also attributable to the minerals in the fine shells of these organisms. Coccolithophores, for example, produce a calcite (limestone) shell that can give the water a milky appearance.

To view ongoing conditions in the Bay of Biscay, click here for daily satellite passes. 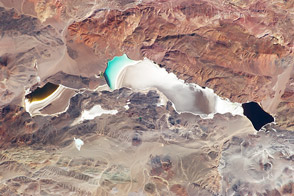