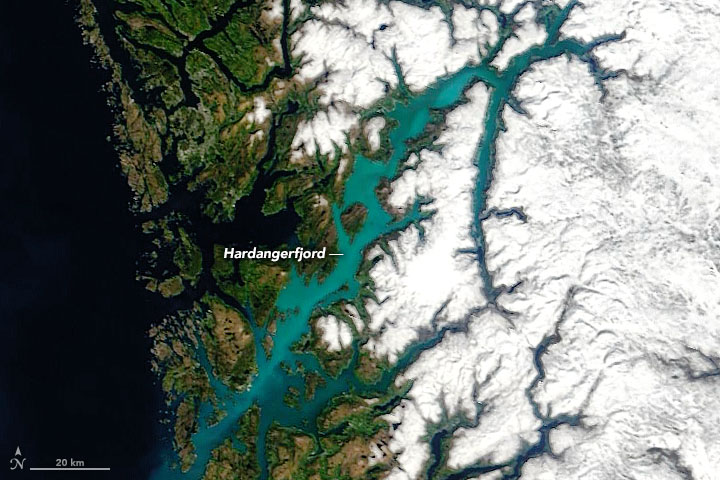 Emiliania huxleyi is about one-tenth the size of a human hair. But in high enough concentrations —a “bloom”—this single-celled phytoplankton becomes visible from space. In May 2020, a vivid bloom of E. huxleyi colored the surface waters of a fjord in southern Norway.

The Moderate Resolution Imaging Spectroradiometer (MODIS) on NASA’s Terra satellite acquired this image of Hardangerfjord on May 30, 2020. Blooms can persist for several weeks, but cloud-free views of the entire fjord—Norway’s second-longest—can be hard to come by. Natural-color satellite images show a hint of color on May 25, and by June 10 vivid color was still visible between the clouds.

E. huxleyi is the most abundant species of coccolithophore, a type of phytoplankton that builds itself a shell of calcium carbonate disks, or “coccoliths.” The shells are so reflective that they can make otherwise dark blue water appear milky blue-green. The photo below, by Irene Huse of Norway’s Institute of Marine Research, shows the ship-based view of water in Hardangerfjord that was turned turquoise by E. huxleyi. 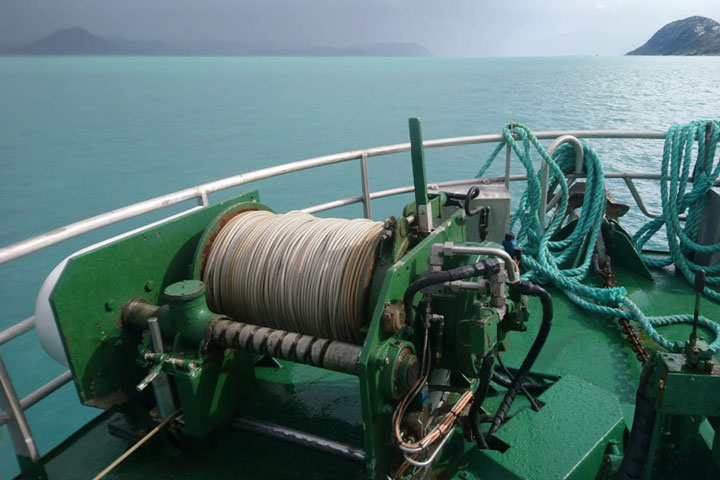 Spring and early summer are common times to see phytoplankton blooms in the North and Norwegian seas. In May and June 2019, a stunning bloom, likely composed primarily of E. huxleyi, showed up along the Norwegian coast and filled Sognefjord—the country’s longest and deepest fjord.

Coccolithophores tend to be good competitors for nutrients, so they can grow well even under low-nutrient conditions that limit other phytoplankton. But other phytoplankton turn up in this region as well, and not all are as harmless as E. huxleyi. In 2019, a bloom of Chrysochromulina leadbeateri in the waters off northern Norway suffocated millions of farmed salmon.