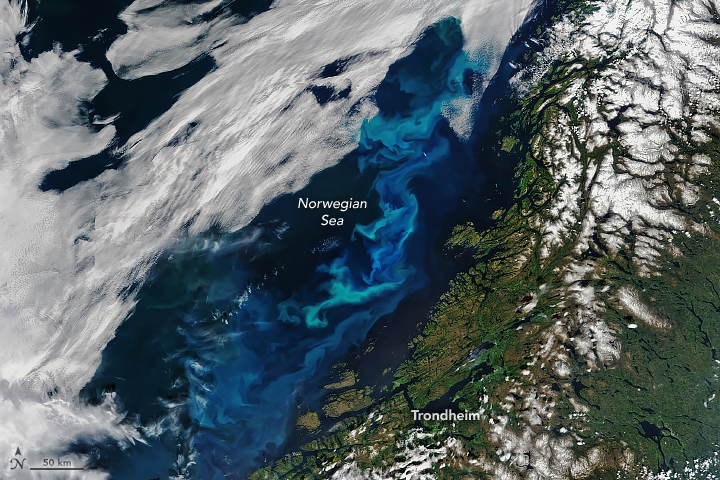 As summer approaches and hours of sunlight increase in the northern hemisphere, the oceans come alive with blooms of phytoplankton. In early June 2019, a stunning bloom colored the waters off the coast of Norway.

Phytoplankton in the Norwegian Sea are visible in this image, acquired on June 5, 2019, with the Moderate Resolution Imaging Spectroradiometer (MODIS) on NASA’s Terra satellite. The bloom, shown here off Nordland and Trøndelag counties, likely includes plenty of Emiliania huxleyi—a species of coccolithophore with white scale-like shells made of calcium carbonate. The mixture of calcium carbonate and ocean water appears milky blue-green. Some of the color may come from sediment or from other species of phytoplankton. 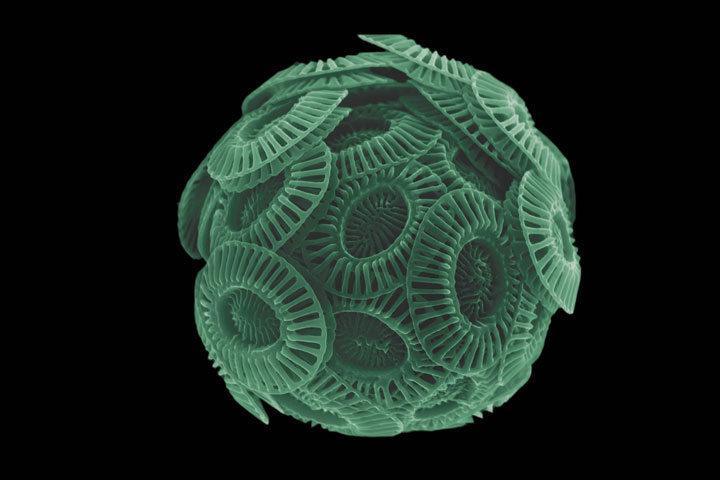 The second image, photographed by Stig Bjarte Haugen of the Norwegian Institute of Marine Research, shows what E. huxleyi looks like though a microscope. (Note that the green hue was added for aesthetic reasons.) Each microalga is just a fraction of the diameter of a human hair. But when rapid cell division leads to an explosive bloom, you get a high enough concentration that they become visible from space.

Previous natural-color satellite images show signs of the milky blue-green color in this area starting in mid-May. Follow the coastline south, and you can see more colorful phytoplankton visible between areas of cloud cover. Even the waters of some fjords, including Sognefjord (Norway’s largest and deepest)—are abloom with E. huxleyi.

E. huxleyi is harmless to fish and people. The same is not true, however, for the species Chrysochromulina leadbeateri. Although not visible in this image, high concentrations of Chrysochromulina were responsible for suffocating millions of farmed salmon in northern Norway. According to news reports, this type of phytoplankton is commonly found in the waters around Norway, but warm weather contributed to their rapid spread in May.