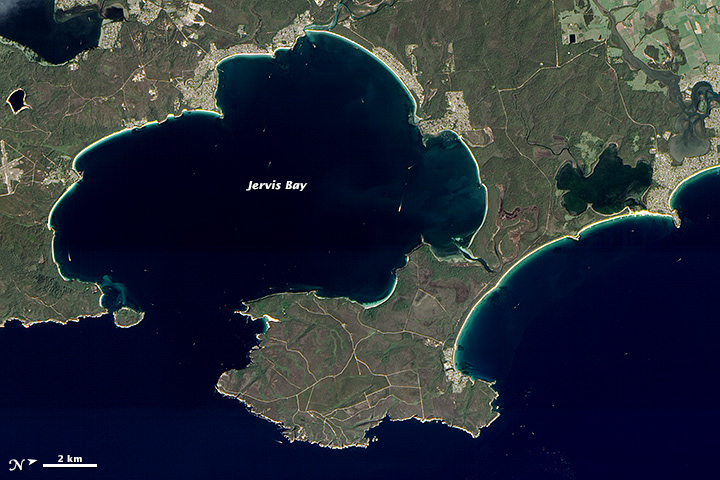 Though ice never came anywhere near Australia during the Pleistocene Epoch—our last Ice Age—it did help shape modern coastlines. Australia’s Jervis Bay is a good example. Growing ice sheets pulled water out of the oceans and lowered sea level around the world. When the Ice Age ended and sea level rose again, a coastal river system in New South Wales was inundated and became Jervis Bay.

The Advanced Land Imager (ALI) on NASA’s Earth Observing-1 (EO-1) satellite captured this natural-color image of Jervis Bay on March 29, 2013. This image has been rotated such that north is to the right.

Bright white sands line the coastline around Jervis Bay. When water erodes rocks and carries them downstream or out to sea, softer minerals slowly erode away. Quartz—composed of clear or white silicon dioxide crystals, or silica—resists erosion longer than other rock types. So the brilliant sands around Jervis Bay owe their color (or lack of it) to the relentless action of water from old rivers, and rising and falling seas over thousands of years. According to the Guinness Book of Records, the sands around Jervis Bay are the whitest in the world. These sands are also finer than typical ocean beach sand.

Just offshore from the white sands are the unusually clear waters of Jervis Bay. Nearby streams are too small to carry heavy loads of sediment that would cloud the water, and the surrounding wetlands and forests also trap sediments that might otherwise drain into the bay. Meanwhile, human settlement in the area has been relatively mild, so runoff from agriculture and land disturbance are minimized.

Visitors to the Jervis Bay National Park may catch glimpses of humpback whales, southern right whales, and dolphins off the coast. On land, rare plant species thrive within the confines of the park. The park even protects habitat for entire communities that have become endangered, such as saltmarsh and floodplain forest. Plants here enjoy abundant moisture, and monthly rainfall totals peak at more than 130 millimeters (over 5 inches) from April through June. 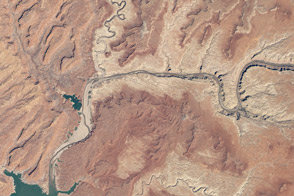