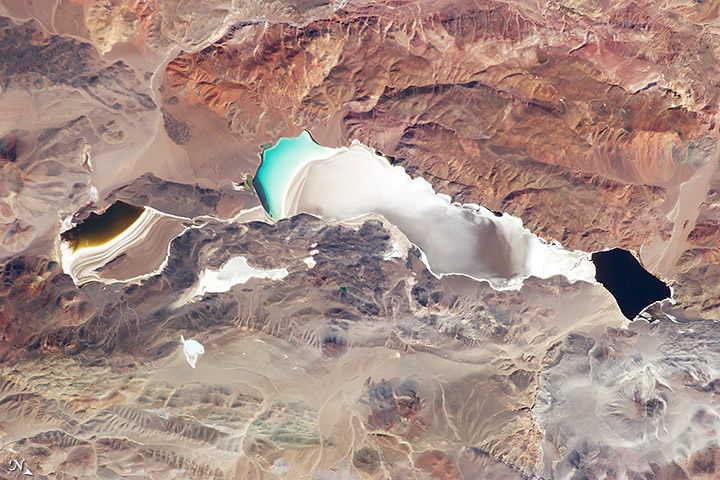 This photograph taken by an astronaut on the International Space Station shows water of different colors within sub-basins of the Laguna (lake) Verde in the high Andes of northwest Argentina. The lake floor lies at 4,095 meters (13,438 feet) above sea level, whereas the peak of the local volcano (west of the lake, not shown) reaches over 3,000 meters higher (6,818 meters or 22,368 feet above sea level).

Laguna Verde (58 kilometers wide, 36 km long) often appears green, giving rise to its name. This image shows the turquoise tint in the central sub-basin (image center), with a yellow to black tinge to water in the southern sub-basin (left)—also known locally as Laguna Negro. The northernmost basin (right) appears black. The large gray zone comprising much of the rest of Laguna Verde is likely a combination of shallow water—only inches deep—and sunglint reflecting off the water surface. The reason for the color differences is that many different families of salt-loving organisms occupy hypersaline lakes such as Laguna Verde. These microscopic organisms appear as different colors, often bright, depending on the salinity and temperature of each water body or sub-basin.

The rest of the lake floor is dry and appears white from the build-up of thick salt deposits. Parallel lines around the southern subbasin (Laguna Negro) indicate prior shorelines of this shrinking water body. Evaporation removes water but leaves ephemeral shorelines marked with white salt.

Astronaut photograph ISS035-E-25019 was acquired on April 20, 2013, with a Nikon D3S digital camera using a 400 millimeter lens, and is provided by the ISS Crew Earth Observations experiment and Image Science & Analysis Laboratory, Johnson Space Center. The image was taken by the Expedition 35 crew. It has been cropped and enhanced to improve contrast, and lens artifacts have been removed. The International Space Station Program supports the laboratory as part of the ISS National Lab to help astronauts take pictures of Earth that will be of the greatest value to scientists and the public, and to make those images freely available on the Internet. Additional images taken by astronauts and cosmonauts can be viewed at the NASA/JSC Gateway to Astronaut Photography of Earth. Caption by M. Justin Wilkinson, Jacobs/JETS at NASA-JSC.

High in the Andes Mountains in Argentina, this salt lake hosts microbes that give the lakes distinct colors. 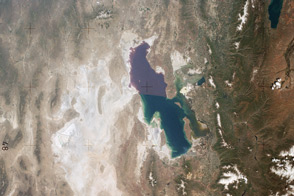 The Comings and Goings of Lakes

Sometimes the slow grind of plate tectonics can determine where and when lakes exist.