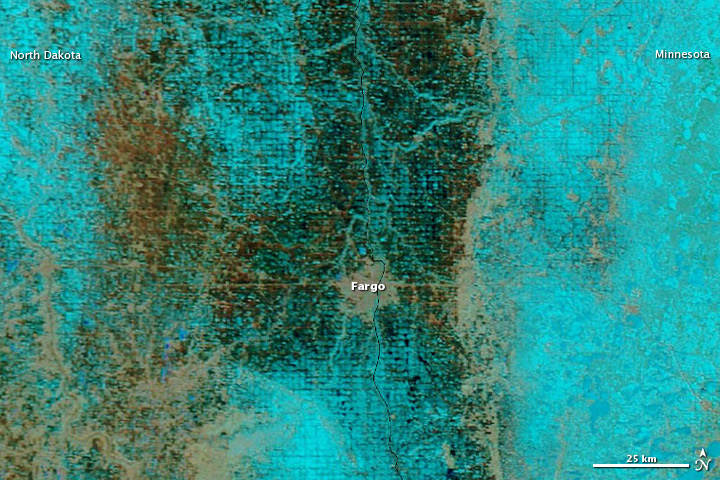 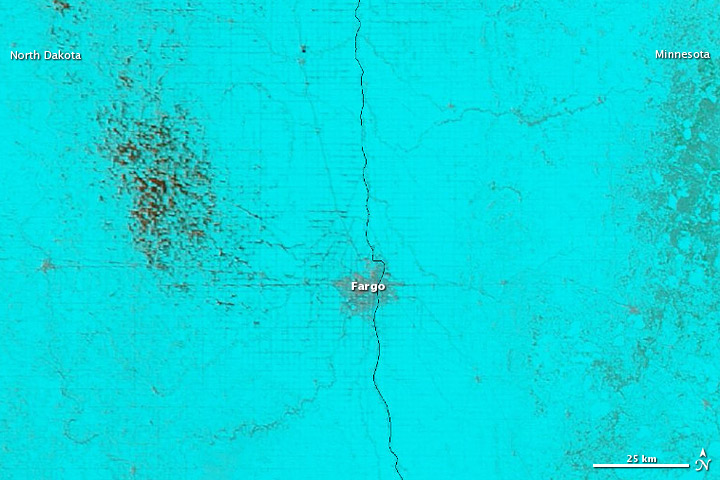 The Red River (also known as the Red River of the North) flows northward through the Red River Valley along the North Dakota-Minnesota border into Manitoba, Canada. On April 28, 2013, the Red River passed its major flood level at Fargo, North Dakota. Major flood level is defined as 30 feet (9 meters), according to the U.S. National Weather Service. As of April 29, the river had reached 31.48 feet (9.60 meters). The water level was expected to continue rising through the morning of May 1, peaking around 35.5 feet (10.8 meters) before gradually falling.

The Moderate Resolution Imaging Spectroradiometer (MODIS) on NASA’s Terra satellite acquired these images on April 26, 2013 (top), and April 1, 2013 (bottom). The images use a combination of infrared and visible light to increase contrast between water and land. Snow is bright turquoise. Water is navy. Bare ground appears in shades of brown. Snow blankets much of the region in the image from April 1. In the image from April 26, the snow has largely retreated, and flood water rests on the land around Fargo.

Springtime flooding has become a recurring event in Fargo, in which water often swamps nearby farmland. On April 29, 2013, Jeff Masters of the Weather Underground provided an in-depth report on these recurring floods. The Red River has reached flood stage at Fargo 19 of the last 20 years, Masters reported. Four of the last five years, the river has experienced one of its top-10 recorded floods. The 2013 flood marks the seventh-highest water level recorded at Fargo since 1897.

Masters reported that multiple weather factors contributed to the Fargo floods of 2013, including above-normal precipitation in autumn that saturated the soil, freezing of the saturated ground in early winter that prevented the soil from absorbing snowmelt runoff, above-average snowfall, and above-average precipitation as the snow melted. Weather alone didn’t drive the 2013 floods, however. Increased urbanization in floodplain areas exposed more people to flood hazards. And the construction of flood defenses, ironically, contributed to the problem; levees that prevented flood water from spreading out over floodplains pushed river levels even higher. Beyond all of these factors, precipitation increased roughly 15 percent over the last century in the Red River region. Increased precipitation in this region is consistent with predictions made by climate change models, Masters explained.