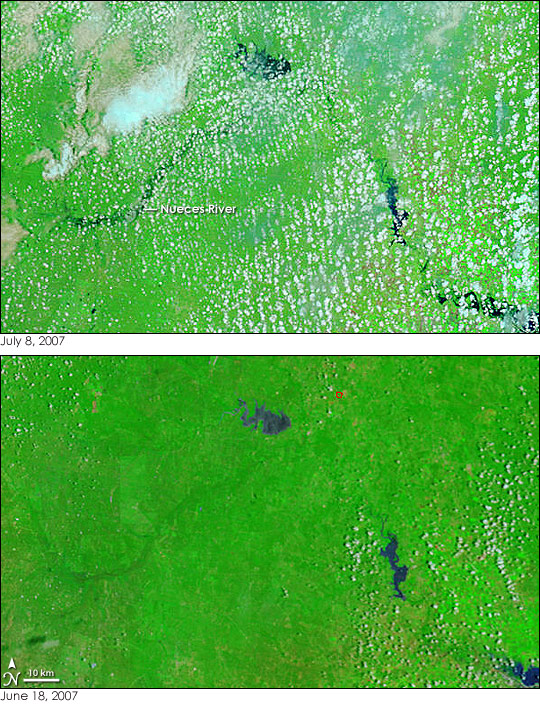 The Nueces River in southern Texas was nearly seven and a half feet above flood stage on July 8, 2007, when the Moderate Resolution Imaging Spectroradiometer (MODIS) flying aboard NASA’s Terra satellite captured the top image. Though popcorn clouds obscure the river, the dark-colored water is still visible. The water is spread well beyond its normal extent, as represented by the lower image, which MODIS captured on June 18, 2007. Both images were created with a combination of infrared and visible light to increase the contrast between water and earth. In these images, plant-covered land is green, water is black or dark blue, and clouds are light blue and white. A red box outlines a fire in the lower image.

The Nueces River crested on July 7 when a gauge in Tilden, Texas, recorded the water level to be 21.6 feet, said the National Weather Service. On July 8, at the time the top image was captured, the water level in Tilden had subsided to 21.4 feet. The river is at flood stage at 14 feet, and at major flood stage at 19 feet. Above 20 feet, says the National Weather Service, the river cuts off portions of its flood plain and severely floods roads and structures near its banks. The highest level ever recorded on the Nueces River was 26.57 feet on September 24, 1967. The July 2007 crest is the eighth highest on record.

The Nueces River was not the only Texas river that was flooding in early July. Weeks of heavy rain caused flooding on every major river in Texas for the first time since 1957, reported the New York Times on July 6.

Floods washed over parts of northern Texas and Oklahoma when heavy rain inundated the region in June 2007.