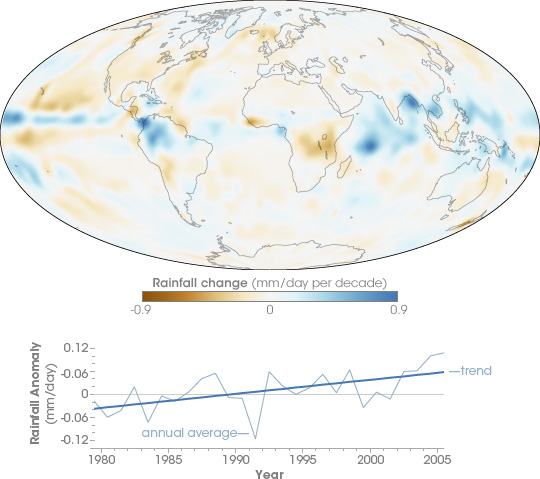 The planet’s wettest areas are getting a little wetter, according to NASA scientists’ analysis of more than 25 years of ground- and space-based rainfall observations. According to scientists from Goddard Space Flight Center, the tropics—where nearly two-thirds of all the rain on the planet falls—experienced a 5 percent increase in total rainfall from 1979 to 2005. Rising surface and atmospheric temperatures are the most likely reason for the increase; most climate models predict that global warming will increase tropical rainfall.

The map above shows patterns of rainfall change between 1979 and 2005. Tropical oceans experienced the greatest increases. In large areas of the Pacific and Indian Oceans, rainfall increased by more than half a millimeter per day each decade. Northern South America and Southeast Asia also experienced wetter weather. Most land areas, however, experienced decreasing rainfall amounts. This unevenness in rainfall changes is not unexpected. Many models predict that rising temperatures will make wet areas wetter and dry areas drier. Global average rainfall may increase, but the increase may come in fewer, but heavier storms.

The graph illustrates the long-term trend (1979-2005) in annual rainfall anomalies in the tropics (between 25 degrees north and south latitudes). In any single year, the average rainfall (millimeters per day) is a fraction above or below the long-term average. For example, in 1988, average rainfall was about 0.05 millimeter per day above average, while in 1991, it was 0.12 millimeters per day below average. While the annual averages bounce up and down (light line), the overall trend (dark line) is that tropical rainfall is rising. Four of the five wettest years in the record occurred since 2002. (The remaining record-wet year was 1998.)

To detect this small but significant change over time, scientists had to remove the influence of other phenomena on global rainfall patterns. The most significant sources of “background noise” in the long-term rainfall data are changes linked to the El Niño-Southern Oscillation cycle and changes that follow major volcanic eruptions. El Niño events influenced where tropical rain fell (oceans versus land) more than they influenced how much fell. But major volcanic eruptions, which inject sunlight-reflecting aerosols high into the atmosphere, temporarily depressed tropical rainfall amounts. Once scientists accounted for these two influences on the long-term rainfall record, the overall increase in tropical rainfall over the past two and half decades became clear.

For more detail on this research by NASA scientists Guojun Gu and Robert Adler, please read the Goddard Website Feature Long-Term Increase in Rainfall Seen in the Tropics.

NASA image and graph by Jesse Allen and Robert Simmon, based on data from Guojun Gu, NASA-GSFC.