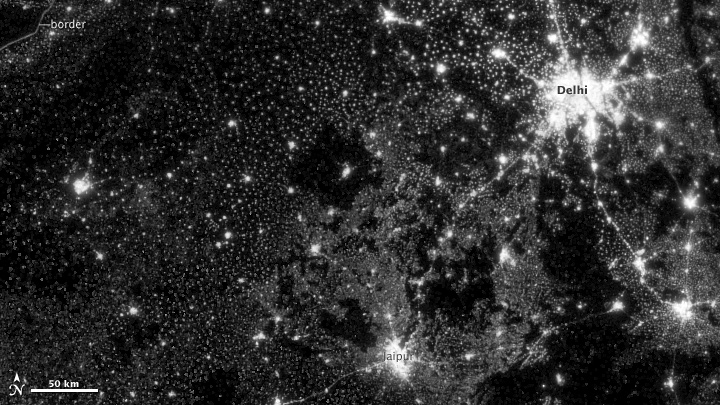 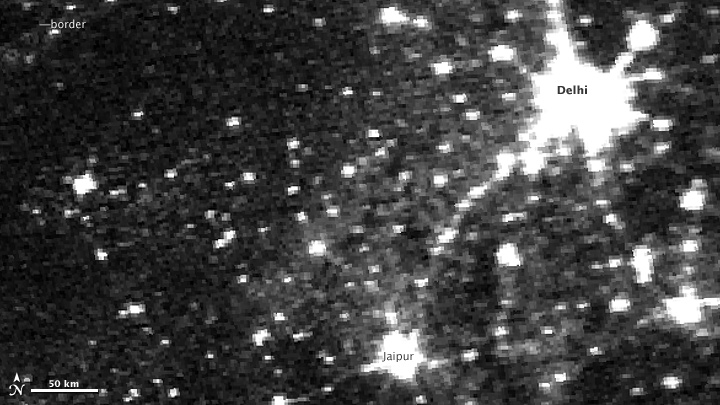 On November 12, 2012, the Visible Infrared Imaging Radiometer Suite (VIIRS) on the Suomi NPP satellite captured the top image of city, village, and highway lights near Delhi, India. For comparison, the lower image shows the same area one night earlier, as observed by the Operational Line Scan (OLS) system on a Defense Meteorological Satellite Program (DMSP) spacecraft.

Since the 1960s, the U.S. Air Force has operated DMSP satellites in order to observe clouds and other weather variables in key wavelengths of infrared and visible light. Since 1972, the DMSP satellites have included the Operational Linescan System (OLS), which gives weather forecasters some ability to see in the dark. It has been a highly successful sensor, but it is dependent on older technology with lower resolution than most scientists would like. And for many years, DMSP data were classified.

Through improved optics and “smart” sensing technology, the VIIRS “day-night band,” is significantly better than OLS at resolving fine details amidst the lights of human settlements and the glow of reflected moonlight. Each VIIRS pixel is a 742 square-meter box, compared to the 5-square kilometer footprint of OLS. The dynamic range—the ability to resolve lights of different brightness—is 250 times better with VIIRS. And since the VIIRS measurements are fully calibrated (unlike DMSP), scientists have the precision required to make quantitative measurements of clouds, heat sources, and other features.

“In contrast to the Operational Line Scan system, the imagery from the new day-night band is almost like a nearsighted person putting on glasses for the first time and looking at the Earth anew,” says Steve Miller, an atmospheric scientist at Colorado State University. “VIIRS has allowed us to bring this coarse, blurry view of night lights into clearer focus. Now we can see things in such great detail and at such high precision that we’re really talking about a new kind of measurement.”

“On a hand-held camera, there’s a nighttime setting where the shutter will stay open much longer than it would under daylight imaging conditions,” says Chris Elvidge, who leads the Earth Observation Group at NOAA’s National Geophysical Data Center. “The day-night band is similar. It increases the exposure time—the amount of time that it’s collecting photons for pixels.” 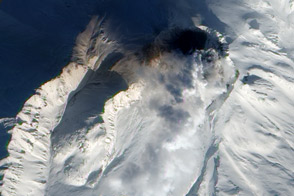