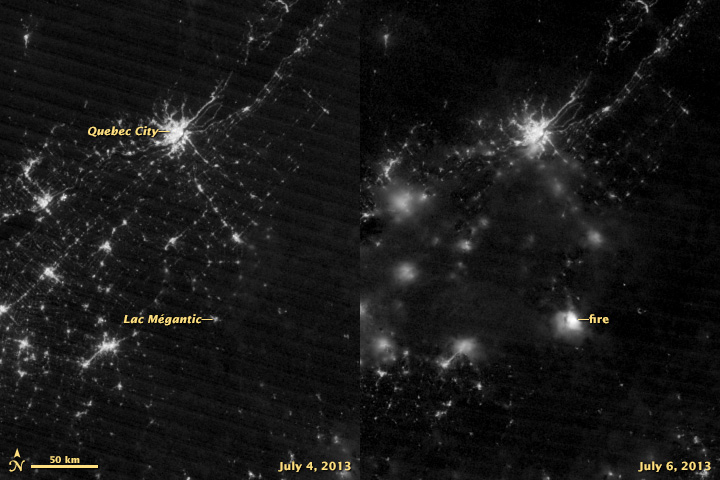 Early in the morning on July 6, 2013, a train carrying crude oil derailed in Lac-Mégantic, Quebec. The resulting crash and series of explosions killed dozens of people, destroyed 40 homes, and forced 2,000 people to evacuate the town. The fire was visible to the Visible Infrared Imaging Radiometer Suite (VIIRS) on the Suomi NPP satellite.

The image on the right was acquired at 6:21 GMT (2:21 a.m. local time) on July 6 by the instrument’s “day-night band,” which detects light in a range of wavelengths from green to near-infrared and uses filtering techniques to observe signals such as city lights, auroras, fires, and reflected moonlight. The image on the left, shown for comparison, was acquired by the same instrument on July 4, before the derailment. Light sources are not as crisp in the July 6 image because of cloud cover.

VIIRS is a spectroradiometer, detecting photons of light in 22 different wavelength bands and collecting them in a similar fashion to the charge-coupled device in your digital camera. Unlike a film camera that captures a photograph in one exposure, VIIRS produces an image by repeatedly scanning a scene and resolving it as millions of individual picture elements, or pixels.

The day-night band goes a step further, determining on-the-fly whether to use its low, medium, or high-gain mode to ensure that each pixel accurately depicts the amount of light emitted. VIIRS can distinguish night lights with six times better spatial resolution and 250 times better resolution of lighting levels (dynamic range) than its predecessor instrument—the Operational Linescan System, which was flown as part of the Defense Meteorological Satellite Program (DMSP).