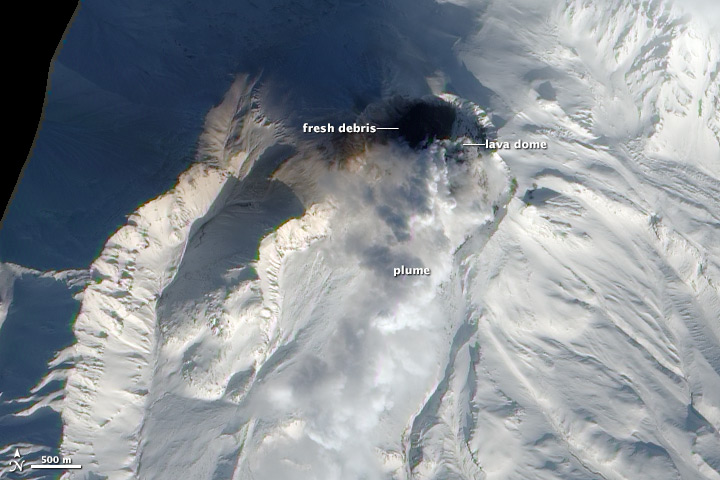 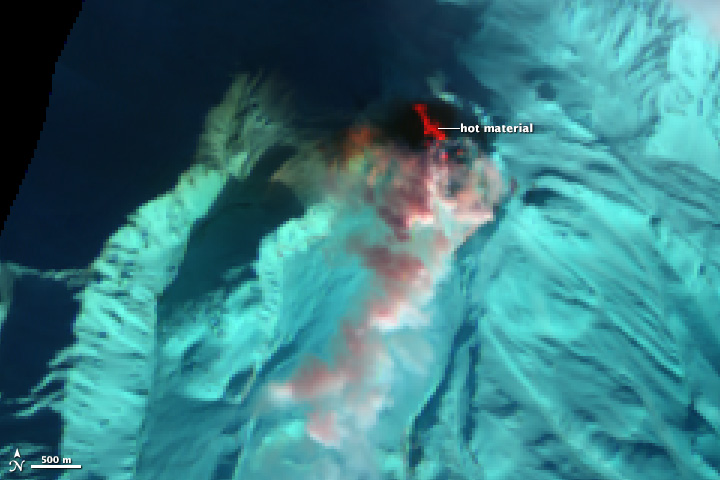 In many ways, the ongoing eruption of Shiveluch is typical of the activity that occurs along a volcanic arc. Thick lava rises from the interface between two convergent tectonic plates. In this case, the relatively light continental crust of the Kamchatka Peninsula is overriding dense oceanic crust, which is being pulled into the Earth’s interior. Instead of flowing down Shiveluch’s steep slopes, the thick, pasty lava builds upwards in a formation known as a lava dome.

This natural-color satellite image (top) shows Shiveluch’s active lava dome on December 9, 2012. A plume of volcanic gases rises from the dome’s summit and drifts towards the south. The north face is covered in black debris, too hot or too fresh to be obscured by snow. The second, false-color image—made with shortwave infrared, near infrared, and visible light—reveals a stream of fresh material on the north side of the dome. The material appears red because it is still hot and glows in shortwave infrared light. It is probably composed of hot lava fragments that recently broke off the surface of the dome.

Shiveluch’s current style of volcanism contrasts sharply with the eruption at nearby Tolbachik Volcano. At Tolbachik, thin, runny lava forms flows over 10 kilometers (6 miles) long. The style of eruption also determines the shape of the volcanoes. Shiveluch is a tall and steep stratovolcano (shaped like a cone with its top blown off), while Tolbachik is a broad, flat-topped shield volcano. Photographs of Shiveluch and Tolbachik hosted by the Kamchatka Volcanic Eruption Response Team (KVERT) show the difference between the two volcanoes in more detail. 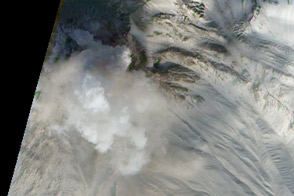