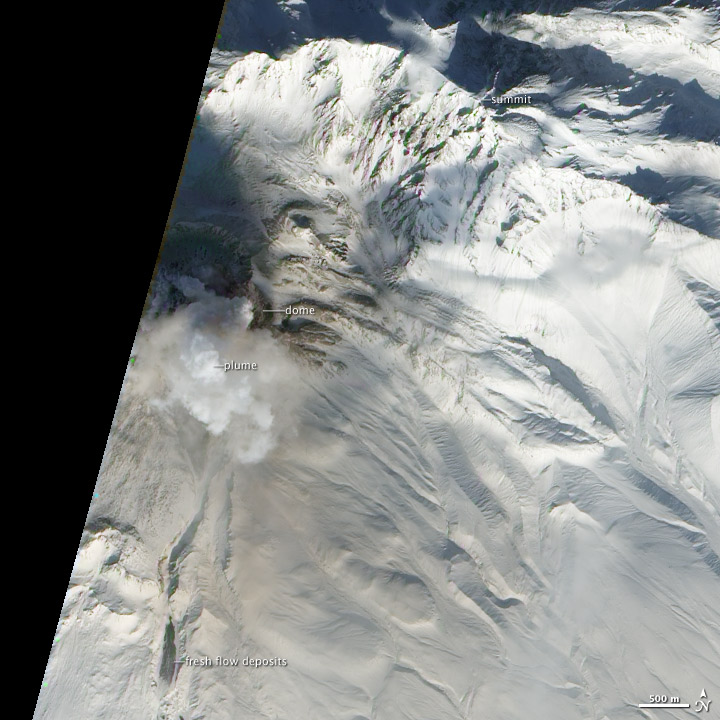 Fresh debris avalanches and a growing lava dome on Mount Shiveluch illustrate two of the processes that build stratovolcanoes. A stratovolcano is “built of alternating layers of lava flows, volcanic ash, cinders, blocks, and bombs.” Shiveluch’s lava dome, partially obscured by a plume of gas and ash, is an example of an extremely slow lava flow. The dome is composed of very thick lava, squeezed out of the Earth like toothpaste from a tube. As the dome rises, rocks and other debris will tumble down the sides. South of the lava dome a fresh debris flow appears dark gray, contrasting with the snow-covered slopes of the volcano. Over time, with layers of lava built on layers of debris built on layers of lava, the volcano grows.

This natural-color image was acquired by the Advanced Land Imager (ALI) aboard the Earth Observing-1 (EO-1) satellite on November 5, 2011. The western (left) side of Shiveluch is cut off because EO-1 was targeted to acquire data for Hyperion, an instrument which allows scientists to study details of the volcano, such as rock types and the composition of the volcanic plume.

Recent photographs of the eruption of Shiveluch, published by the Kamchatka Volcanic Eruption Response Team, show the continuing activity.

The summit of an active volcano is one of the most dynamic places on Earth, with changes apparent from one week to the next.

A thin plume of ash and/or steam streamed from Shiveluch Volcano on the Kamchatka Peninsula on October 3, 2009.