A Block of Thwaites 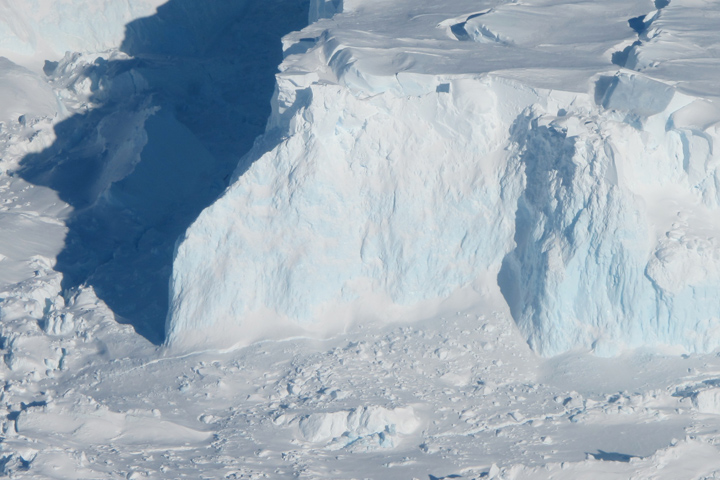 Since October 2009, NASA and its scientific partners have made yearly airborne surveys of Antarctica and Greenland—with occasional trips to Alaska and the Arctic Ocean. The goal is to study changes in the structure and motion of the ice at both poles, and to fill in the gap in data between the ICESat satellite mission (which officially ended in 2010) and the launch of ICESat II around 2016. The plane-based project is called Operation Icebridge.

In October and November 2012, the Icebridge team returned to Antarctica for a fourth southern springtime, flying NASA’s DC-8 research plane on roundtrip surveys from Punta Arenas, Chile, to the edges of Antartica and back—flights that can last 11–12 hours.

In 2012, the research team put extra emphasis on gathering imagery and data from Thwaites Glacier and Pine Island Glacier; from the ice streams feeding the Ronne and Filchner ice shelves; and the sea ice in the Weddell and Bellingshausen seas, as well as the ice streams flowing into them. Most of the flights covered areas in West Antarctica, where melting and ice motion has been accelerating in recent years.

The photograph above shows an edge of the Thwaites Ice Shelf and was taken by Jim Yungel, program manager for the Airborne Topographic Mapper, a laser altimeter carried by the DC-8. The blue areas visible on the shelf edge are areas of denser, compressed ice. Over time, the weight of polar glaciers and ice sheets compresses ice and squeezes out the gases and air.

Thwaites Glacier is rapidly changing, and the Icebridge team has surveyed it multiple times. In research published in 2011, scientists from Columbia University revealed that the glacier is pinned to an underwater ridge just offshore in Pine Island Bay, and that ridge helps pile up the ice and slow its advance into the sea. But the connection is weakening, and researchers project that Thwaites will come unpinned and start advancing much faster within the next 20 years or so.

Read mission updates and other background about Operation Icebridge on their blog and their news page. You can also view a short video here.

Researchers working on Operation Icebridge captured fresh photos and data from the ice on the bottom of the world. 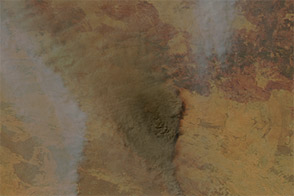