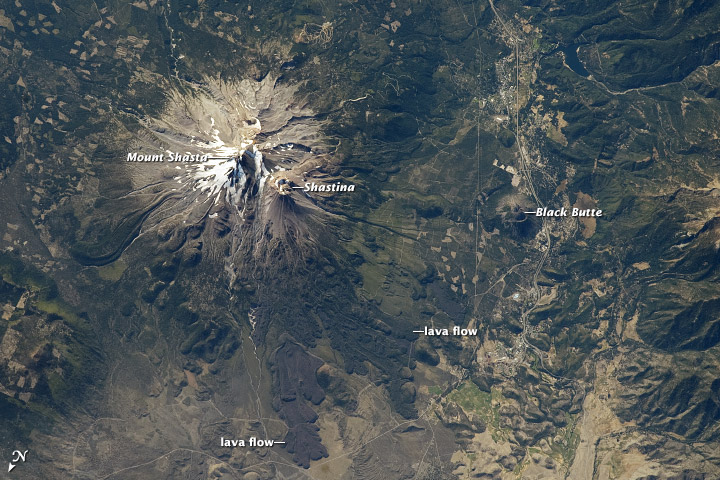 The Cascade Range includes many impressive stratovolcanoes along its north-south extent, some active during the past few hundred years. Mount Shasta in northern California is among the largest and most active (over the past 4,000 years) of the volcanoes in the Cascades. The summit peak stands at an elevation of 4,317 meters (14,160 feet) above sea level, and is formed by the Hotlum cone—the location of the most recently recorded volcanic activity (in 1786). Shasta’s summit is high enough to retain snow cover throughout the year, and several small glaciers are present along the upper slopes.

Immediately to the west of the summit peak (but still on the upper slopes of Shasta) lies the Shastina lava dome complex, reaching 3,758 meters (12,330 feet) above sea level. (Note that the image is rotated so that north is to the lower left.) Two dark lava flows that originated from the Shastina complex and flowed downslope (toward the northwest) are visible in the lower center of this image. The flows contrast sharply with the surrounding vegetated lower slopes and the barren upper slopes of Shasta. The Black Butte lava dome complex forms another isolated hill on the lowermost slopes of Shasta, near the town of Weed, California.

Geologists have mapped prehistoric pyroclastic flow and mudflow deposits (or lahars) from Hotlum cone and the Shastina and Black Butte lava dome complexes to distances of 20 kilometers (12 miles) from the summit of Shasta. As Mount Shasta has erupted within the past 250 years and several communities are within this hazard radius, the U.S. Geological Survey’s California Volcano Observatory actively monitors the volcano for signs of activity.

Astronaut photograph ISS033-E-6245 was acquired on September 20, 2012, with a Nikon D3S digital camera using a 400 millimeter lens, and is provided by the ISS Crew Earth Observations experiment and Image Science & Analysis Laboratory, Johnson Space Center. The image was taken by the Expedition 33 crew. It has been cropped and enhanced to improve contrast, and lens artifacts have been removed. The International Space Station Program supports the laboratory as part of the ISS National Lab to help astronauts take pictures of Earth that will be of the greatest value to scientists and the public, and to make those images freely available on the Internet. Additional images taken by astronauts and cosmonauts can be viewed at the NASA/JSC Gateway to Astronaut Photography of Earth. Caption by William L. Stefanov, Jacobs/ESCG at NASA-JSC.