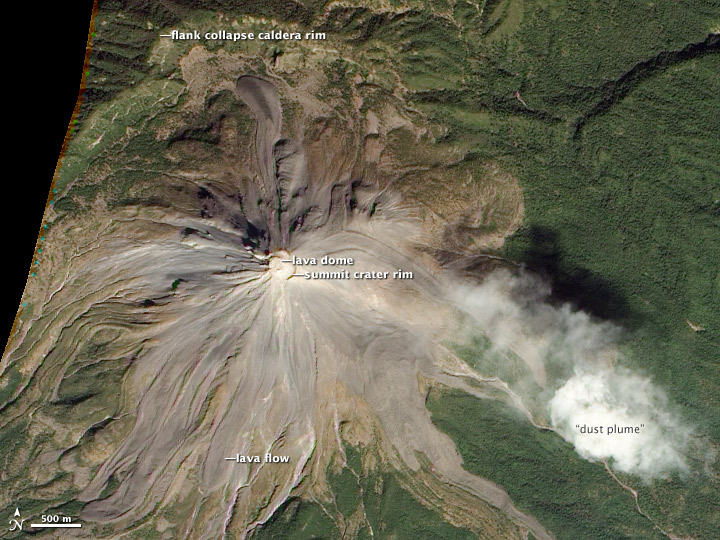 Colima Volcano, Mexico’s most active, has been erupting since 1998. The eruption began with several months of earthquakes beneath the volcano, followed by explosions and rockfalls at the summit lava dome as it began to grow. Dome growth was accompanied months later by a series of lava flows which cascaded down the southwestern flank of the mountain, stretching up to 3,100 meters (10,000 feet) from the summit. Since then dome growth has continued, with a few periods of actively flowing lava. As of March 2010, the dome was growing about 2,000 cubic meters (70,000) cubic feet a day, leading to frequent small rockfalls and occasional ash plumes. In January 2011, local newspapers reported “dust plumes” rising over Colima, likely pulverized lava stirred up by landslides at the summit dome.

This natural-color satellite image was acquired on January 22, 2010, by the Advanced Land Imager (ALI) on Earth Observing-1 (EO-1). The perspective of the image (straight down) flattens the appearance of the peak, which is in reality a classic steep-sided stratovolcano. Similarly, the relatively low resolution of the image [10 meters (33 feet) per pixel] gives the lava flows a smooth appearance. They are actually very rough block lava flows.

The image shows evidence of four types of volcanic activity: lava dome growth, explosive eruptions, flank collapse, and lava flows. The active lava dome nearly fills Colima’s summit crater. The top of the dome is higher than the crater rim, and material occasionally tumbles down the volcano’s western and southern slopes. A light colored plume, probably the result of rockfall on the dome, extends to the east (right) of the summit. The summit crater is the remnant of an explosive eruption in 1913 which knocked 100 meters (300 feet) off the top of the mountain.

To the north of Colima’s summit is the rim of a 4 kilometer (2 mile)-wide caldera, formed about 4,300 years ago in a massive flank collapse: similar to the May 18, 1980, eruption of Mount St. Helens. Modern Colima Volcano rises near the center of this caldera. Recent lava flows (erupted since 1961), cover the upper slopes of the volcano. Older lava flows (erupted in the 1800s and earlier) are covered in green vegetation.