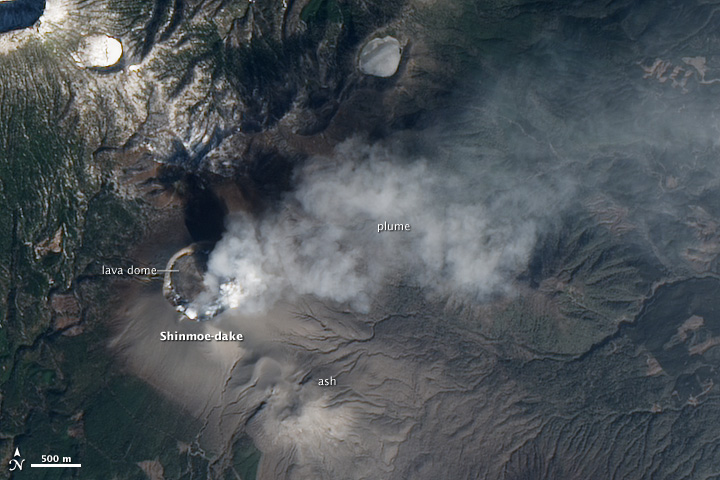 After a week of violent activity, the eruption of Japan’s Shinmoe-dake Volcano shows no signs of slowing down. This natural-color satellite image shows Shinmoe-dake on the morning of February 3, 2011. The image was acquired by the Advanced Land Imager (ALI) aboard Earth Observing-1 (EO-1) at about 10:30 a.m. local time, between an early-morning eruption at 3 a.m. and an early-afternoon eruption at 12:17 p.m.

According to the Global Volcanism Program, small precursor eruptions caught the attention of Japanese authorities in March 2010, and sporadic explosions and ash emissions continued for 10 months. On January 26, 2011, ash and volcanic bombs began to spew from the volcano, as intermittent explosions shook the surrounding area.

Along with the explosive eruptions, a lava dome has been growing inside Shinmoe-dake’s crater. The Mainichi Daily News reported that the lava dome was 600 meters (2,000 feet) wide, and about 110 meters (360 feet) high on February 3rd. The rounded lava dome fills most of the summit crater.

A volcanic plume, colored white and light gray, rises from the margins of the dome, thinning as it spreads eastwards. Gray ash coats the ground southeast of the crater. Additional features of the Kirishima Volcanic Field, such as the ice-covered crater lake to the northeast, surround Shinmoe-dake.

By January 29, 2011, a lava dome began growing within Shinmoe-dake Volcano.