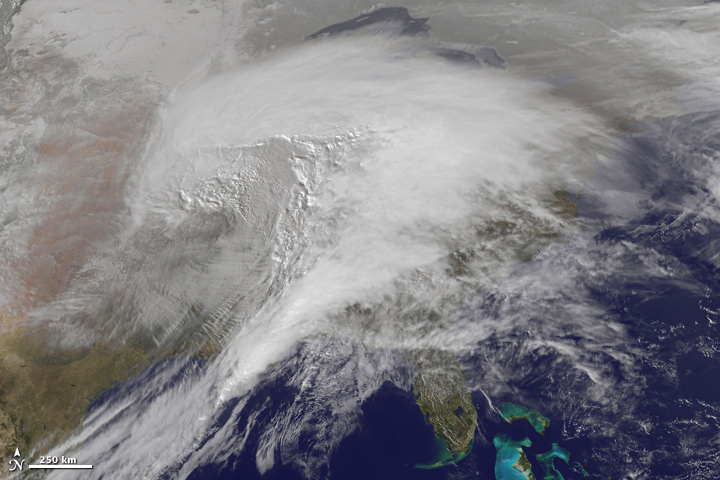 In a winter marked by several crippling storms, the storm of February 1–2, 2011, stands out. Heavy snow, ice, freezing rain, and frigid wind battered about two thirds of the United States, making it “a winter storm of historic proportions,” said the National Weather Service. This animation—made with images from the NOAA-NASA GOES 13 satellite—shows the giant storm developing and moving across the country between January 31 and February 2.

This image, a still taken from the animation, shows the storm at 4:31 p.m. Eastern Time on February 1. In the image, the storm measures about 2,000 kilometers (1,240 miles) from west to east. The storm formed when cold Arctic air pushed south from Canada while moist air streamed north from the Gulf of the Mexico. The animation shows clouds building over New Mexico and Texas early in the day. As the system develops and moves northeast, the storm grows and becomes more organized. By the end of February 1, the storm was a sprawling comma that extended from the Midwest to New England.

By 9:00 a.m. Eastern Time on February 2, the National Weather Service reported that 21 states from New Mexico to New Hampshire had received at least 5 inches (13 centimeters) of snow. Wisconsin, Illinois, Missouri, and Oklahoma declared states of emergency. According to news reports, one in three Americans were affected by the storm.

The monster storm brought record snowfall to many areas, including Chicago, perhaps the hardest hit population center. The city received 20.2 inches of snow, a record for February and the third biggest snowstorm for any date in Chicago. The record was set at 23 inches (58.4 cm) on January 26–27, 1967.

The storm left a solid swath of snow from New Mexico to New England. Images of previous 2010-11 winter storms in December and January can be viewed in the severe storms section of the Earth Observatory.

A massive winter storm battered two-thirds of the United States on February 1–2, 2011.