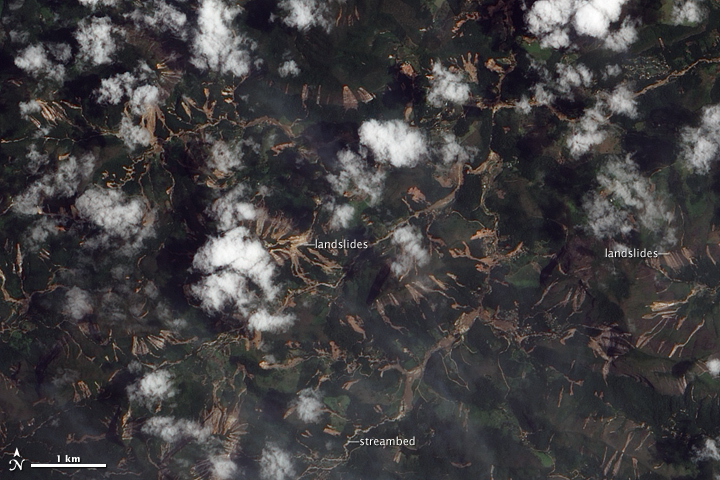 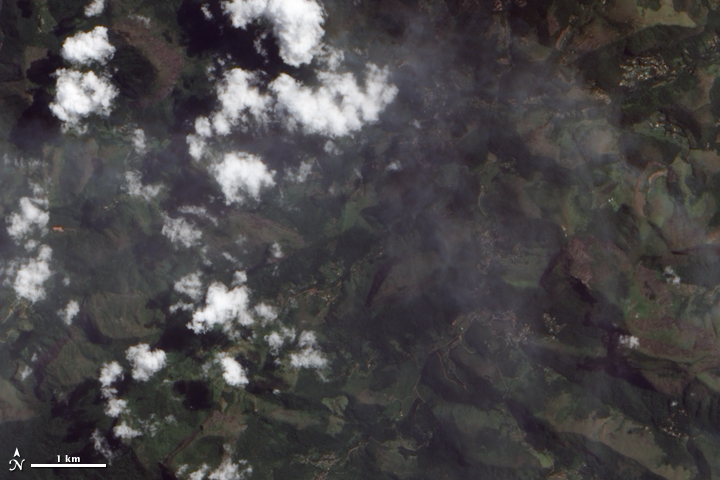 After weeks of persistent cloud cover, the skies above Brazil finally cleared enough for satellites to take stock of the mudslides that devastated the states of Rio de Janeiro, Santa Catarina, and SÃ£o Paulo in mid-January.

The Advanced Land Imager (ALI) on NASA’s EO-1 satellite captured these true-color images of the hills north and west of Teresópolis, Brazil, on February 2, 2011 (top), and May 24, 2010. In both images, forested land is dark green, while land that has been cleared is light green. The 2011 image shows dozens of tan stripes where the hillsides have been overrun by mudslides, usually within or adjacent to those light green patches.

Nearly a month’s worth of rainâ€”26 centimeters (10 inches)â€”fell on January 12 in the Serra do Mar mountain region and the nearby cities of Teresópolis and Nova Friburgo. The downpours provoked flash floods and sent rivers of mud flowing down steep hillsides, killing 860 people and leaving at least 8,700 homeless. 429 people have not yet been accounted for, according to Agencia Brazil, the state news service.

The unusually heavy rains were attributed by some meteorologists to La Niña, but human activity likely exacerbated the scale of the disaster. Rapid population growth in the area has led Brazilians to build favelas (self-built settlements) on the steep slopes above Teresópolis. Those structures have been built on previously forested land, so the reduced tree cover has diminished the ability of the soil to hold water and the hills to hold onto the soil. Many of the houses lost, according to reports, were built on slopes of 45 degrees or more or in the buffer zones around rivers and streams. The Brazilian Forest Code officially forbids building in such areas.

In the wake of the floods and mudslides, the Brazilian government is now planning a nationwide disaster-prevention and early-warning system. Planning Minister Miriam Belchior announced that the government also will spend 6.7 billion real ($4 billion U.S.) through 2014 on water-drainage and hillside-recovery projects across the country.

After weeks of cloud cover, the ASTER instrument on Terra satellite collected this image of the mudslide-riven Serrana region of Brazil on January 18, 2011.