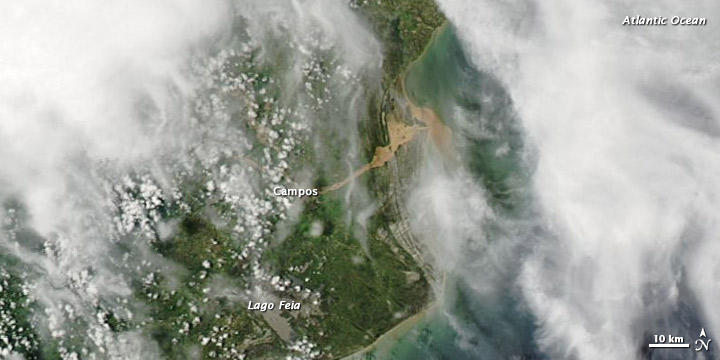 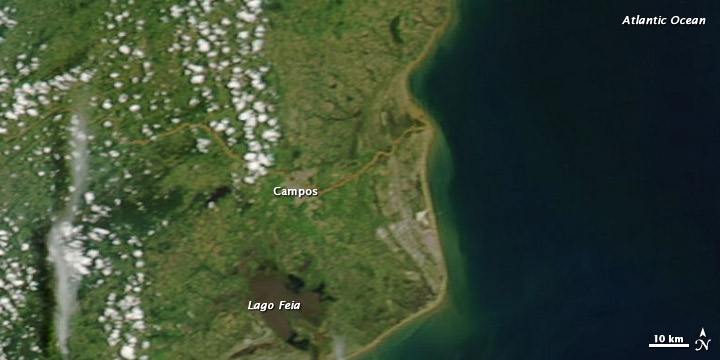 Floods, landslides, and a burst levee forced thousands from their homes in southeastern Brazil in early January 2012. Days of heavy rain inundated parts of the state of Minas Gerais, claiming several lives, and forcing more than 60 towns and cities to declare a state of emergency, according to news reports. In northeastern Rio de Janeiro State, flood waters tore through a levee on the River Muriaé, and high water headed toward the city of Campos. Meanwhile, The Rio Times reported that the entire state was on maximum alert.

Fast-moving flood waters carry heavy loads of mud and debris. Not surprisingly, a sediment plume occurred along the Atlantic coast in the wake of the heavy inland rains. The Moderate Resolution Imaging Spectroradiometer (MODIS) on NASA’s Aqua satellite captured the top image on January 6, 2012. For comparison, the bottom image shows the same area two weeks earlier, on December 24, 2011.

In early January, muddy water has overtopped riverbanks northeast of Campos, and an equally muddy plume appears along the Atlantic shore. The River Muriaé, affected by the burst levee, feeds the river that empties into the sea in this area. The sediment-choked water might result from the levee rupture, or from the widespread heavy rains.

Floods, landslides, and a burst levee forced thousands from their homes in southeastern Brazil in early January 2012.