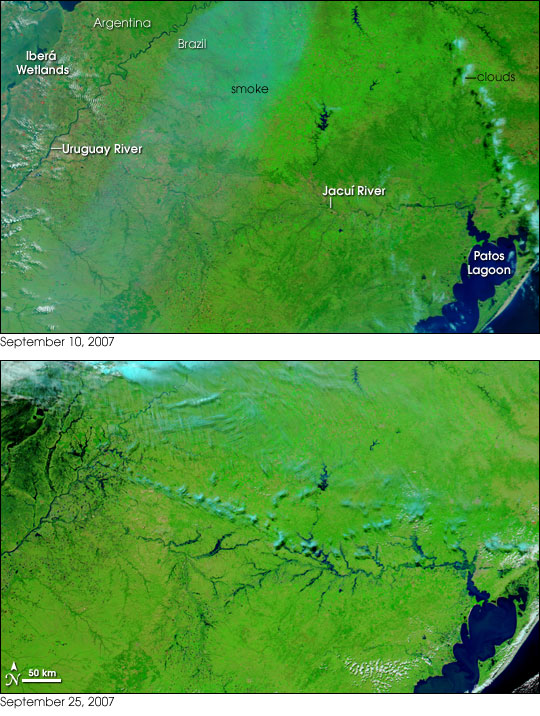 According to the Xinhua news service, heavy rainfall in late September 2007 caused severe flooding in Brazil’s southernmost state, Rio Grande do Sul. More than a dozen cities declared a state of emergency. Several people were killed, and as many as 4,000 lost their homes.

This pair of satellite images captured roughly two weeks apart shows the extent of the flooding. Made with a combination of visible and infrared light, the images highlight the location of water on the surface. Depending on how muddy and/or shallow it is, water will appear blue to nearly black: the shallow, muddy water of the Patos Lagoon appears blue, while the Atlantic Ocean (lower right) is nearly black. Vegetation appears bright green, and clouds are turquoise or white. On September 10, a swath of smoke from intense fires burning in the surrounding countries cuts diagonally across the scene.

In the two weeks that passed between the top and bottom image, heavy rains recharged the Iberá Wetlands (upper left) and swelled the tributaries of the Jacuí River, which flows west to east and empties into Patos Lagoon.

These observations of Brazil were made by the Moderate Resolution Imaging Spectroradiometer (MODIS) on NASA’s Terra (top image) and Aqua (bottom image) satellites. The large images provided above have a spatial resolution (level of detail) of 250 meters per pixel. The MODIS Rapid Response Team provides twice-daily images of the region in additional resolutions and formats, including photo-like natural color.

Flooding in Columbia and Venezeula