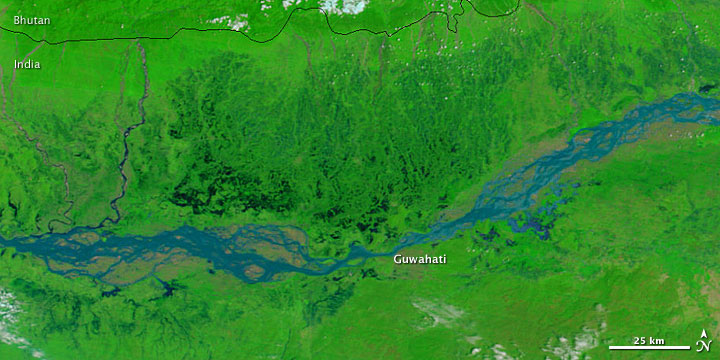 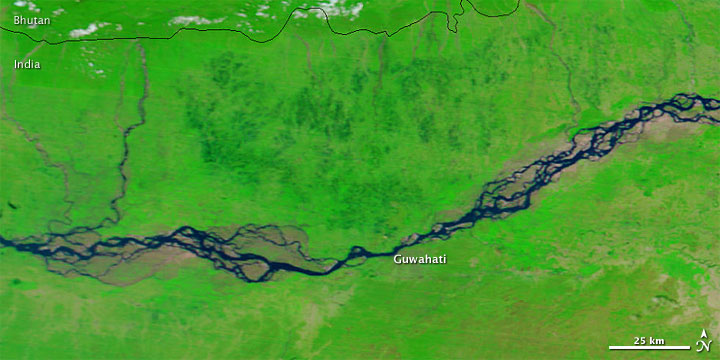 The Moderate Resolution Imaging Spectroradiometer (MODIS) on NASA’s Terra satellite captured these images of the area around Guwahati, which sits along the Brahmaputra River not far from the India-Bhutan border. The top image is from April 28, 2010, and the bottom image is from April 16, 2010. Both images use a combination of infrared and visible light to increase the contrast between water and land. Vegetation appears bright green, and bare ground appears pinkish tan. Clouds appear sky blue. Water varies in color from electric blue to navy. The relatively light color of the Brahmaputra’s waters on April 28 likely results from the angle of sunlight, but it might also be a sign of muddy water.

Expanses of standing water surround the river on April 28, and the water sits on surfaces that had been relatively dry days earlier. Tributaries to the river, both east and west of Guwahati, are swollen in the later image.

The April floods in Assam were the second cluster of floods in that state in 2010, Sify News reported. The earlier round of floods struck the state the previous month, although with less severe effects.