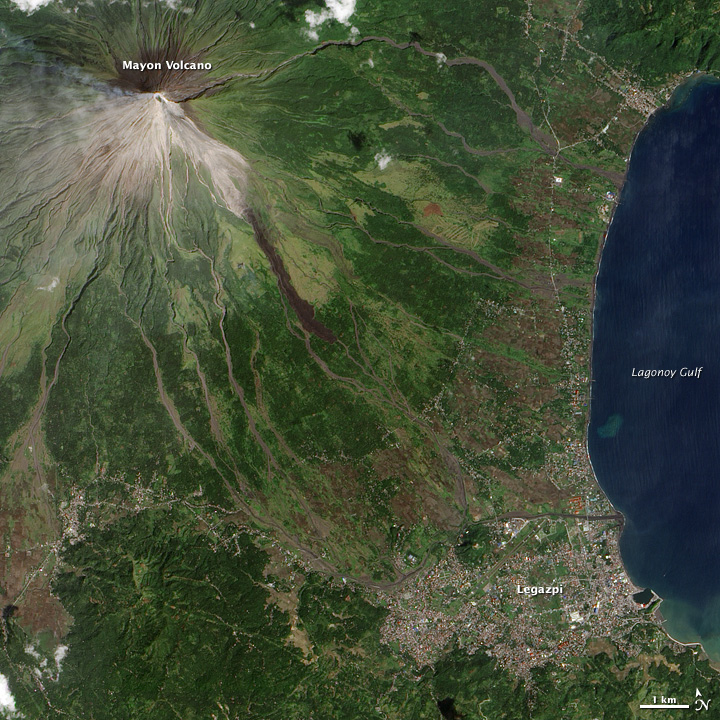 Tens of thousands of people living within the danger zone (up to 8 kilometers away) of Mayon Volcano in the Philippines were forced to evacuate to emergency shelters in mid-December 2009 as small earthquakes, incandescent lava at the summit, and minor ash falls suggested a major eruption was on the way. On the evening of December 14, the local volcano observatory raised the alert level to Level 3, which means “magma is close to the crater and hazardous explosive eruption is imminent.”

This natural-color image of Mayon was captured on December 15, 2009, by the Advanced Land Imager on NASA’s Earth Observing-1 (EO-1) satellite. A small plume of ash and/or steam is blowing west from the summit. Dark-colored lava or debris flows from previous eruptions streak the flanks of the mountain. A ravine on the southeast slope is occupied by a particularly prominent lava or debris flow.

According to local news reports from December 16, fragments of lava were continuously detaching from the lava filing the crater and cascading down slope up to 3 kilometers. Lava flows reached several hundred meters from the summit, but they were still confined to ravines. Disaster planning officials speculated that, given Mayon’s history, evacuations could last more than two months.

In late December 2009, the volcano hazard at Mayon Volcano in the Philippines reached Alert Level 4, which means â€œa hazardous explosive eruption is possible within days.â€