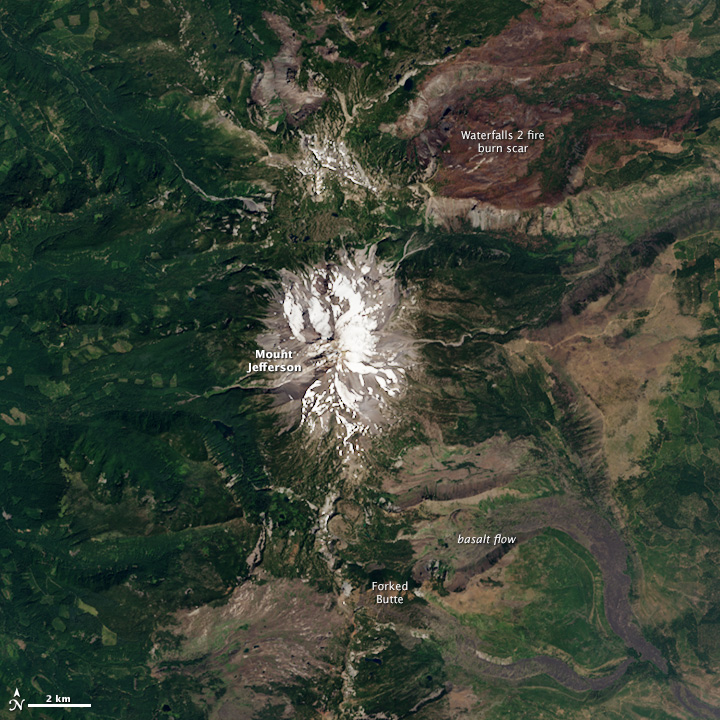 At the end of what could only have been a miserable day, William Clark wrote in his journal: “We made 22 Miles only to day the wind and a Strong current being against us all day, with rain. Discovered a high mountain S E. Covered with Snow which we call Mt. Jefferson.” It was March 30, 1806, and Clark, Meriwether Lewis, and their Corps of Discovery had been on the trail home for just five days after wintering near the Oregon coast. They named the towering peak after Thomas Jefferson, the president who sent them west to explore the headwaters of the Missouri River and find a water route to the Pacific Ocean.

Mount Jefferson was one of five volcanic peaks that the Lewis and Clark expedition observed rising over the Cascade Range during their voyage down the Columbia River, and the only one they named. At 3,199 meters (10,495 feet) in elevation, Mount Jefferson ranks as the second highest peak in Oregon.

This view of the volcano came from the Operational Land Imager on the Landsat 8 satellite on August 13, 2013. Even from above, the peak’s symmetrical cone shape and glacier-capped height set it apart from the surrounding mountains.

Mount Jefferson is a stratovolcano that has erupted periodically over the past 300,000 years. The volcano can produce large, explosive eruptions, and the last one was about 15,000 years ago. Smaller events have also occurred, including lava flows and lahars. Some of the most recent activity associated occurred about 7,600 years ago, when basaltic lava flowed from Forked Butte and the North Cinder Peak south of Mount Jefferson down valleys carved out by glaciers. These flows look like dark rivers in the lower half of the image.

Much of Mount Jefferson’s history is unknown since erosion by glaciers has long since erased the evidence of past eruptions. Even today, the mountain is covered in glaciers, making it a significant challenge for climbers.

Though past activity may not be obvious, more recent disasters are. The red-brown region northeast of Mount Jefferson is a burn scar from the 2012 Waterfalls 2 fire. And treeless regions near the basalt flows are scars from the B&B complex fire.

The bright white glaciers and surrounding dark forest also make Mount Jefferson a challenge for satellites. To see detail in the dark forest, one would have to brighten the image enough that the ice would be overly white and featureless. But darkening the image to see features in the ice or clouds would obscure the forest. Providing detail on both the bright and dark ends of the scale, this image represents the best Landsat view to date. The Landsat 8 satellite is more sensitive to brightness and color than past Landsat satellites.

In the astronaut photo from August 5, 2009, bright white glaciers cap the summit of Oregon’s Mount Hood, while gray volcanic deposits line the rivers that drain the mountain, and green forests cover the lower slopes.