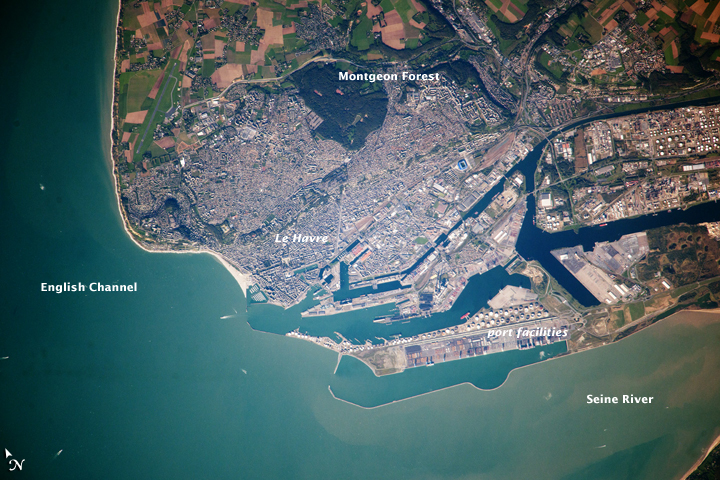 The port city of Le Havre sits at the confluence of the Seine River and the English Channel along the northern coastline of France (Upper Normandy region). It is the largest container port in France, and the second largest in total traffic after Marseille. The extensive port facilities, visible at image center, include numerous docks (large cargo ships are clearly visible), storage tanks for petroleum and other chemicals, and large industrial and warehouse facilities with white rooftops.

The port of Le Havre also serves seagoing pleasure cruise vessels. The southern edge of the port facility along the Seine includes a seawall-enclosed ship turning area (image lower center). North of the city, the Montgeon Forest includes 200 hectares of woodland and 30 hectares of meadows and lawns.

The urban area of Le Havre was largely destroyed during World War II. After the war, the city was rebuilt following the vision of architect Auguste Perret, who favored the use of reinforced and precast concrete in building structures. Much of the city built between 1945 and 1964 follows Perret’s plan in both form and materials—leading to the designation of Le Havre as a UNESCO World Heritage Site in 2005.

Astronaut photograph ISS037-E-21618 was acquired on October 26, 2013, with a Nikon D3X digital camera using a 1000 millimeter lens, and is provided by the ISS Crew Earth Observations experiment and Image Science & Analysis Laboratory, Johnson Space Center. The image was taken by the Expedition 37 crew. It has been cropped and enhanced to improve contrast, and lens artifacts have been removed. The International Space Station Program supports the laboratory as part of the ISS National Lab to help astronauts take pictures of Earth that will be of the greatest value to scientists and the public, and to make those images freely available on the Internet. Additional images taken by astronauts and cosmonauts can be viewed at the NASA/JSC Gateway to Astronaut Photography of Earth. Caption by William L. Stefanov, Jacobs at NASA-JSC.