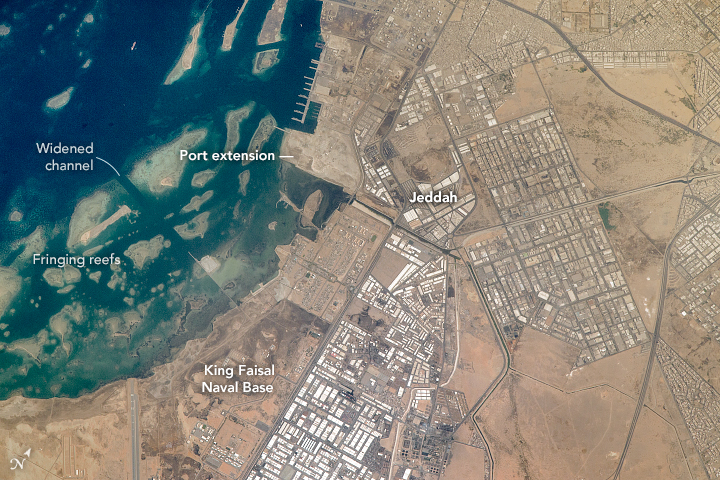 An astronaut aboard the International Space Station captured this photograph of part of Jeddah (sometimes spelled Jiddah), a major port city on the Red Sea coast of Saudi Arabia. Jeddah is the largest commercial center and port in the nation and, with more than three million people, is the second largest city by population (after the capital, Riyadh). Click here to see another astronaut photograph of the northern part of the city.

Over the past twelve years, the port has been extended from the original coastline. Additional, wider channels were also dredged to make way for heavy ship traffic. Fringing reefs are characteristic of the Red Sea coast; several stand offshore from the King Faisal Naval Base.

Jeddah is sometimes referred to as the “Gateway to Mecca” because it is the entry point for pilgrims and for commercial goods headed to the inland city. Mecca lies approximately 70 kilometers (43 mile) to the east of Jeddah, and it draws millions of pilgrims each year for the annual Hajj.

Astronaut photograph ISS052-E-15927 was acquired on July 14, 2017, with a Nikon D4 digital camera using an 1150 millimeter lens, and is provided by the ISS Crew Earth Observations Facility and the Earth Science and Remote Sensing Unit, Johnson Space Center. The image was taken by a member of the Expedition 52 crew. The image has been cropped and enhanced to improve contrast, and lens artifacts have been removed. The International Space Station Program supports the laboratory as part of the ISS National Lab to help astronauts take pictures of Earth that will be of the greatest value to scientists and the public, and to make those images freely available on the Internet. Additional images taken by astronauts and cosmonauts can be viewed at the NASA/JSC Gateway to Astronaut Photography of Earth. Caption by Andi Hollier, Hx5, JETS Contract at NASA-JSC. 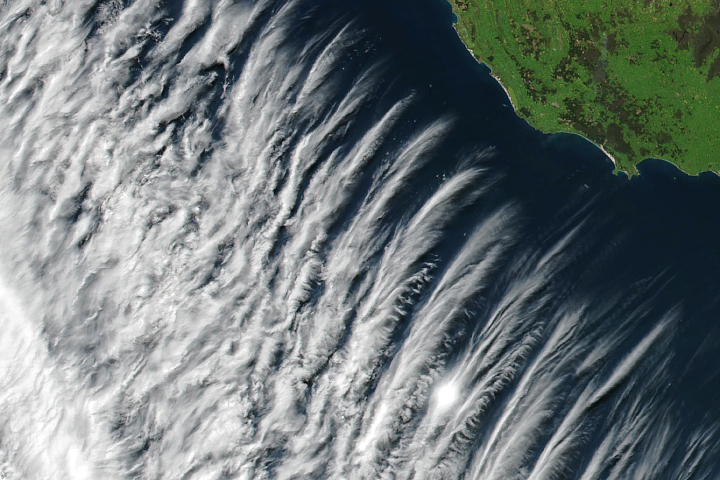 Coral reef ecosystems thrive off the coast of Saudi Arabia.