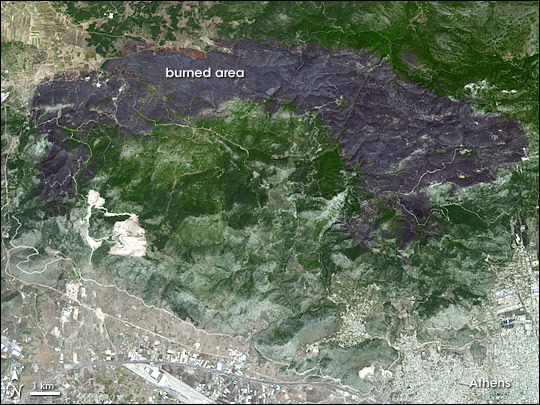 Just north of Athens lies Mount Parnitha, much of which is a national park. Home to numerous endemic (unique) species, Parnitha comprises one of the few remaining forested areas near Athens. On June 28, 2007, the mountain caught fire and burned for several days, lighting up the Athens night sky, filling the daytime skies with smoke, and leaving devastation in its wake.

On July 20, 2007, the Advanced Spaceborne Thermal Emission and Reflection Radiometer (ASTER) captured the scar the fire left on the landscape. Around the burn scar, forest remains green, although the vegetation is interrupted by areas of pavement and bare ground. South of the forest, the city of Athens changes the landscape, with gray-white surfaces of pavement and buildings.

According to a report from the Athens News Agency, the fire came on the heels of a six-day heat wave, with temperatures spiking at 46 degrees Celsius (115 degrees Fahrenheit). The fire threatened Athens’ northwestern suburbs and forced the evacuation of one hotel. Officials reported that fires throughout Greece in late June resulted from heat-induced explosions in electricity pylons, although arson was suspected in other cases.

You can download a 15-meter-resolution KMZ file of the burned area on Mount Parnitha suitable for use with Google Earth.

Just north of Athens lies Mount Parnitha, much of which is a national park. Parnitha comprises one of the few remaining forested areas near Athens. On June 28, 2007, the forests of Mount Parnitha caught fire and burned for several days.