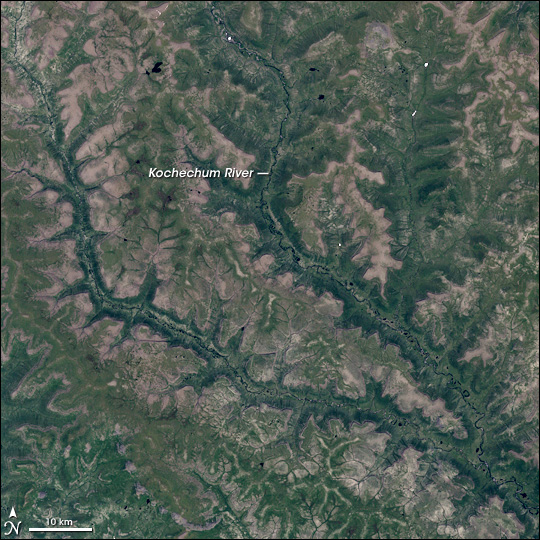 The Central Siberian Plateau is largely a wilderness, especially to the north. From north to south, the tundra—a land of lichen-covered rocks, mossy bogs, and widely scattered, stunted trees—becomes the taiga, the conifer-dominated northern forests. Permanently frozen ground underlies much of the area. Prevented from decaying by the long months of freezing temperatures, dead vegetation and organic matter accumulate into thick layers of peat.

In late July 2007, a team of NASA and Russian scientists set off on a three-week trip down the Siberian Plateau’s Kochechum River to study the transition from tundra to taiga in the hopes of better understanding how natural cycles and human influence—including climate change—may alter the ecological and physical characteristics of this region. The Kochechum carves southeast through the center of this image, which was captured by NASA’s Landsat 7 satellite on July 16, 2001. Deep green lobes of woods line the rivers, in some places giving the landscape the look of oak leaves. (A more obvious example of this pattern appears in an image of the West Siberian Plain). Farther from the river, the landscape is a mosaic of bare or sparsely vegetated ground (dull tan) and boggy areas. Small, dark blue ponds dot the ground.

On July 28, a helicopter flew a small international team of scientists into this remote area to begin their journey. For three weeks, the team will travel by boat down the Kochechum, collecting data from the ground that they can use to verify the accuracy of satellite-based observations of the region’s forests. NASA scientist Jon Ranson of Goddard Space Flight Center’s Biospheric Sciences Branch is providing updates on the team’s experiences—from swarming mosquitoes to fish soup for breakfast—through a near-daily blog on the Earth Observatory. You can also see their location mapped on an image of the region or follow the team’s progress using Google Earth.

You can download a 28.5-meter-resolution KMZ file of the upper section of the Kochechum River suitable for use with Google Earth.

Resembling a work of art, this Landsat image of fall colors in the mountains of central Pennsylvania illustrates both the yearly cycle of change in forests and fields and the slow shaping of a landscape over millions of years.