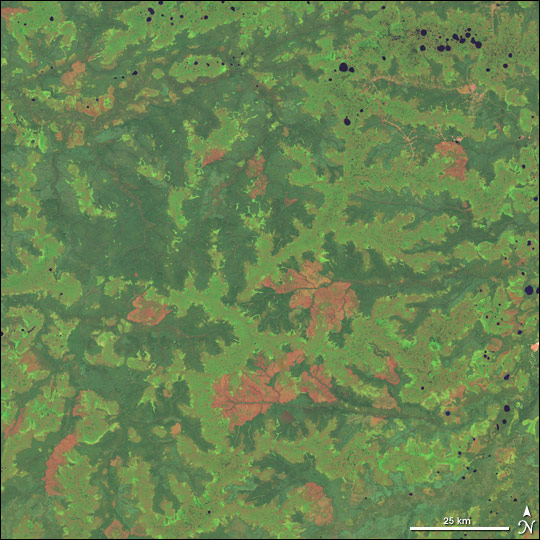 The West Siberian Plain is a vast flatland area in central Russia that stretches almost the full latitude of the country—from the Arctic Ocean in the north to the foothills of the Altay Mountains in the south. Bound on the west by the Ural Mountains and on the east by the Yennisey River, the plain is one of the largest flatland areas in the world. From north to south it encompasses multiple biomes, including tundra, several types of forest, and grasslands known as steppes. North of the city of Tomsk, pictured here, the West Siberian Plain is home to a mixture of tundra and mixed taiga (boreal) forest.

In this false-color satellite image, oak-leaf-shaped river and stream drainages on the West Siberian Plain are clothed in deep green forests. Occasionally, the evergreen forest is mixed with deciduous (trees that lose their leaves seasonally) species, creating patches of pink-colored bare ground. In between the river drainages, the lighter green of the tundra is dotted with blue-black pools and ponds. These soggy peat lands are very rich in organic matter because poor drainage (because of the flatness of the land and the underlying permafrost) and the region’s cold temperatures slow decomposition.

This image was acquired by the Enhanced Thematic Mapper Plus (ETM+) sensor on NASA’s Landsat satellite on September 19, 1999. The image is made from light reflected by the Earth's surface in the visible (green), near-infrared, and shortwave-infrared parts of the electromagnetic spectrum.