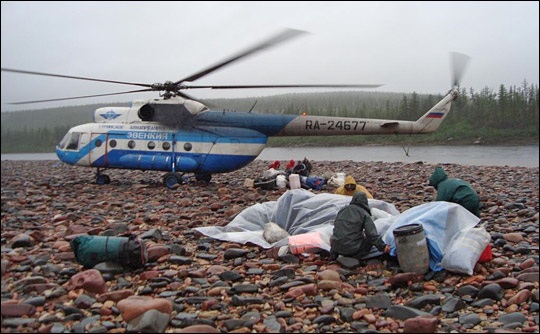 It’s July 10, 2008, and Dr. Jon Ranson and Dr. Slava Kharuk have just landed on the banks of the Kotuykan River in the Taymyrskiy Region of far northern Siberia. A cold drizzle—typical of Siberian summer—falls as the two scientists and their team unload boats, food, camping gear, and scientific equipment from the helicopter that brought them to this remote region far from roads or towns. Ranson, Head of the Biospheric Sciences Branch at NASA’s Goddard Space Flight Center, and Kharuk, Head of the Biological Laboratory of the Sukachev Institute of Forests, plan to record changes in the Siberian forest as they navigate down the river in boats. Their ultimate goal is to improve the view from space so that scientists the world over have better tools to monitor global climate change.

In few places is the impact of recent global warming more evident than in Earth’s cold places. Among mountain glaciers and polar ice and tundra, a few degrees of warming bring about monumental changes: ice dwindles, frozen ground thaws and sinks, and warm-weather plants creep in. From space, NASA’s suite of Earth-observing satellites monitor these changes to help scientists study the rate and impact of climate change. But understanding the information that the satellites send back to Earth isn’t always easy. Scientists match measurements taken on the ground with satellite measurements to confirm that when the satellite says this, it really means that.

Scientists need a range of ground measurements from many different places to match satellite data with Earth’s widely varying ecosystems. It is this need for ground data that has brought Ranson and Kharuk to the remote reaches of Siberia. One of the things they hope to understand is how the Geoscience Laser Altimeter System (GLAS) on NASA’s Ice, Cloud,and land Elevation Satellite (ICESAT) measures tree height and density. GLAS measurements match ground observations well when the sensor is looking at dense, tall forests, but its measurements of short, widely spaced trees, such as those that grow in frozen ground near the edge of the tundra, aren’t as accurate.

The distinction between the ecosystems is important because scientists expect far northern forests to change as temperatures climb. The lines between tundra, short forest, and tall forest will shift as southern species move north. The ground data will help Ranson and Kharuk map GLAS measurements of tree height and density to ecosystems on the ground. Once they understand how GLAS sees these ecosystems, scientists will be able to use the instrument to chart change in boreal ecosystems across the Arctic.

Follow Ranson and Kharuk on their scientific journey down the Kotuykan River in Siberia 2008: Kotuykan River Expedition, which will be updated on the Earth Observatory three times a week through July 24, 2008.