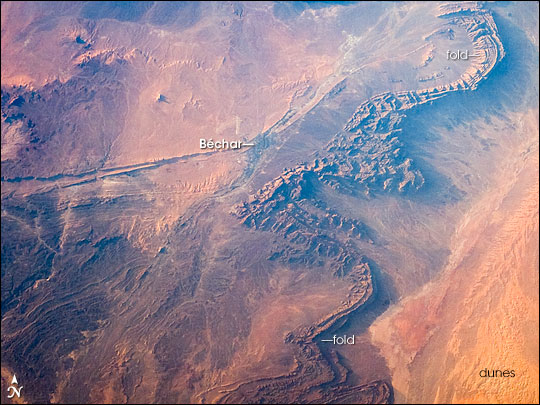 The Béchar Basin of northwest Algeria formed as layers of sedimentary rocks from the Paleozoic Era (250-540 million years ago) folded and cracked during collisions of Africa and Europe during the Tertiary Period (2-65 million years ago). Hydrocarbon (coal, oil) reservoirs are tucked among the fragments of sedimentary rocks and fossilized coral reefs that make up the basin’s rock layers, which are up to 8,000 meters thick. In this photograph of part of the basin captured by astronauts on the International Space Station on June 27, 2007, dark brown to tan folded ridges of these Paleozoic sedimentary layers extend across the image from top to bottom.

Sand dunes are visible to the north, south, and west of the city of Béchar (gray-blue region to the left of the ridges) at image center. Wadis (river channels) are dry most of the year in the arid climate of the region. Unconsolidated (loose) sands left in the channels by intermittent streams are transported by surface winds after the water is gone. This leads to the formation of individual dunes and larger dune fields (both bright tan in color) along the wadi courses, which also concentrate sands from other sources; dune fields are visible to the south of Béchar and at image lower right. The oblique view (looking at an angle, not straight down, from the International Space Station) of this astronaut photograph accentuates cliff and dune shadows, providing a sense of the topography of the region.

Featured astronaut photograph ISS015-E-15323 was acquired June 27, 2007, by the Expedition 15 crew with a Kodak 760C digital camera using a 70 mm lens. The image is provided by the ISS Crew Earth Observations experiment and the Image Science & Analysis Laboratory, Johnson Space Center. The image in this article has been cropped and enhanced to improve contrast. The International Space Station Program supports the laboratory to help astronauts take pictures of Earth that will be of the greatest value to scientists and the public, and to make those images freely available on the Internet. Additional images taken by astronauts and cosmonauts can be viewed at the NASA/JSC Gateway to Astronaut Photography of Earth.

The Béchar Basin of northwest Algeria formed as layers of sedimentary rocks from the Paleozoic Era (250-540 million years ago) folded and cracked during collisions of Africa and Europe during the Tertiary Period (2-65 million years ago). In this photograph of part of the basin captured by astronauts, dark brown to tan folded ridges of these Paleozoic sedimentary layers extend across the image from top to bottom.

While the Great Lakes region of North America is well known for its importance to shipping between the United States, Canada, and the Atlantic Ocean, it is also the location of an impressive structure in the continent’s bedrock: the Michigan Basin. Formed during the Paleozoic Era (approximately 540–250 million years ago) the Basin looks much like a large bullseye defined by the arrangement of exposed rock layers that all tilt inwards, forming a huge bowl-shaped structure. The outer layers of the Basin include thick deposits of carbonates—rocks containing carbon and oxygen, such as limestone—deposited over millions of years when a shallow sea covered the region. These carbonate rocks are mined throughout the Great Lakes region using large open-pit mines. The largest carbonate mine in the world, Calcite Quarry, appears in this astronaut photograph. 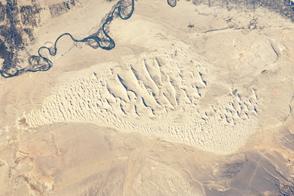 This photograph taken by an astronaut on the International Space Station highlights a sand dune field within the Burqin-Haba River-Jimunai Desert near the borders of China, Mongolia, Russia, and Kazakhstan.