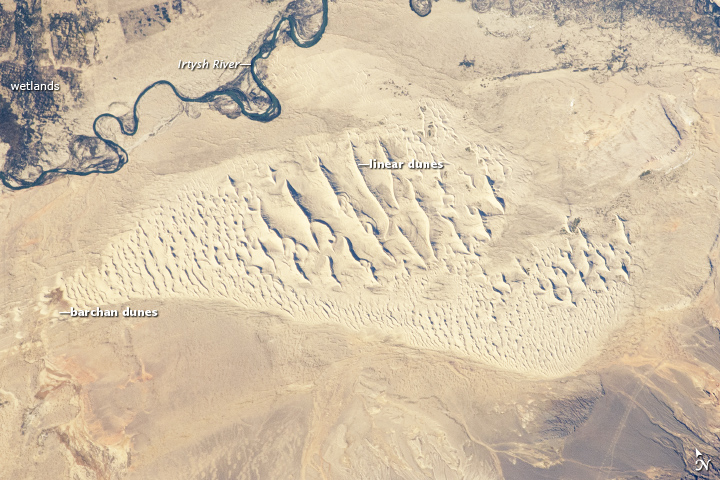 This photograph taken by an astronaut on the International Space Station highlights a sand dune field within the Burqin-Haba River-Jimunai Desert near the borders of China, Mongolia, Russia, and Kazakhstan. The dune field (approximately 32 kilometers or 20 miles long) is located immediately west-northwest of the city of Burqin (not shown), and is part of the Junggar Basin, a region of active petroleum production in northwestern China. The Irtysh River—with associated wetlands and riparian vegetation (appearing grey-green in the image) —flows from its headwaters in the Altay Mountains towards Siberia (right to left across the image).

Tan, linear dunes at image center (on the south side of the Irtysh River) dominate the view. The dunes are formed from mobile barchan (crescent-shaped) dunes moving from left to right in this view. The barchans eventually merge to form the large, linear dunes which can reach 50 to 100 meters (165 to 330 feet) in height. Sand moving along the southern edge of the field appears to be feeding a southeastern lobe with a separate population of linear dunes (image lower right).

The Burqin-Haba River-Jimunai Desert area also includes darker gravel-covered surfaces that form pavements known locally as gobi. At the resolution of an astronaut photograph, these are somewhat indistinguishable from the vegetated areas arresting some of the dunes. But gobi tend to be located on the flat regions between the dunes.

Astronaut photograph ISS028-E-44444 was acquired on September 8, 2011, with a Nikon D2Xs digital camera using a 180 mm lens, and is provided by the ISS Crew Earth Observations experiment and Image Science & Analysis Laboratory, Johnson Space Center. The image was taken by the Expedition 28 crew. The image has been cropped and enhanced to improve contrast. Lens artifacts have been removed. The International Space Station Program supports the laboratory as part of the ISS National Lab to help astronauts take pictures of Earth that will be of the greatest value to scientists and the public, and to make those images freely available on the Internet. Additional images taken by astronauts and cosmonauts can be viewed at the NASA/JSC Gateway to Astronaut Photography of Earth. Caption by William L. Stefanov and M. Justin Wilkinson, Jacobs/ESCG at NASA-JSC.

This photograph taken by an astronaut on the International Space Station highlights a sand dune field within the Burqin-Haba River-Jimunai Desert near the borders of China, Mongolia, Russia, and Kazakhstan.