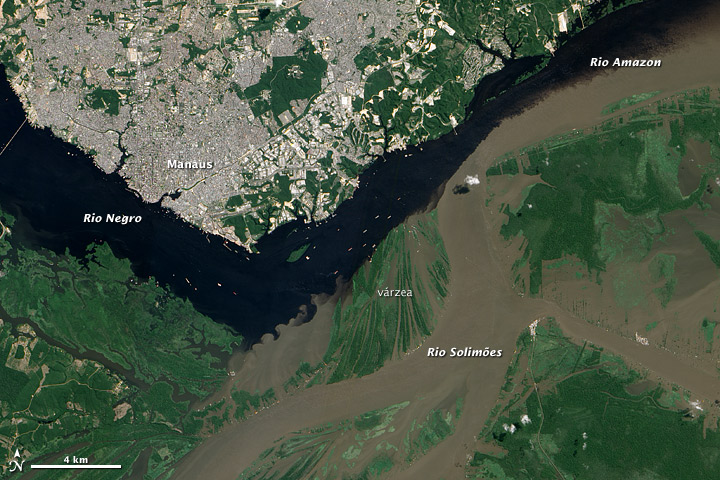 The Encontro das Aguas in Brazil, or the “Meeting of the Waters,” is one of those places on Earth where you just say: “Wow!”

“Six Mississippis’ worth of cafe-au-lait-colored water are converging here with two Mississippis’ worth of black-tea-colored water to produce the greatest hydrologic spectacle on the planet,” said Robert Meade, who spent decades studying rivers for the U.S. Geological Survey. “Put in terms of the sheer quantities of water, what we are seeing here is a volume of water at least a dozen times greater than the total of the water falling over the Niagara, Iguassu, and Victoria Falls combined.”

The coffee-colored water, rich with sediment, runs down from the Andes Mountains on the Rio Solimões. The black-tea water from the Colombian hills and interior jungles is nearly sediment-free and colored by decayed leaf and plant matter; it bears the name Rio Negro. Where the two rivers meet, east of Manaus, Brazil, they flow side by side within the same channel for several kilometers. The cooler, denser, and faster waters of the Solimões and the warmer, slower waters of the Negro form a boundary visible from space and from the water surface itself. Turbulent eddies driven by the faster-moving whitewater eventually mix the two, as they merge to become the Lower Amazon River.

The Advanced Land Imager on NASA’s Earth Observing-1 (EO-1) satellite captured this natural-color view of the confluence of the Rio Negro and Rio Solimões on June 17, 2012. At the time of the image, the water levels at Manaus, Brazil, were higher than they had been in at least a century. Manaus, the principal city of the Amazonas region, experienced record flooding in the first half of 2012.

Just west of the confluence, narrow braided channels and rivulets cross vegetated lowlands, carrying the muddy waters of Rio Solimões into the Negro during most seasons of the year. Much of the greenery on those spits of land, according to Luiz Antonio Martinelli of Brazil’s Centro de Energia Nuclear na Agricultura, is “várzea,” or flooded forests.

“Every high water season, a lot of change occurs in these smaller channels and even in the bigger islands,” Martinelli noted. “An island can disappear in a year, as another can be built at the same time. The geomorphology is very dynamic.”

According to Meade, those ephemeral channels through the lowlands are sometimes used by boats headed to and from Manaus in order to avoid having to go all the way to the main confluence. 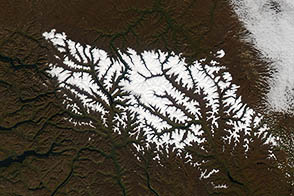