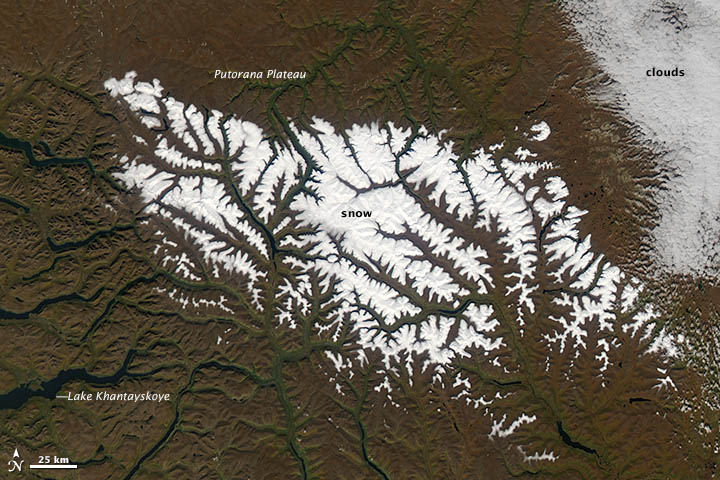 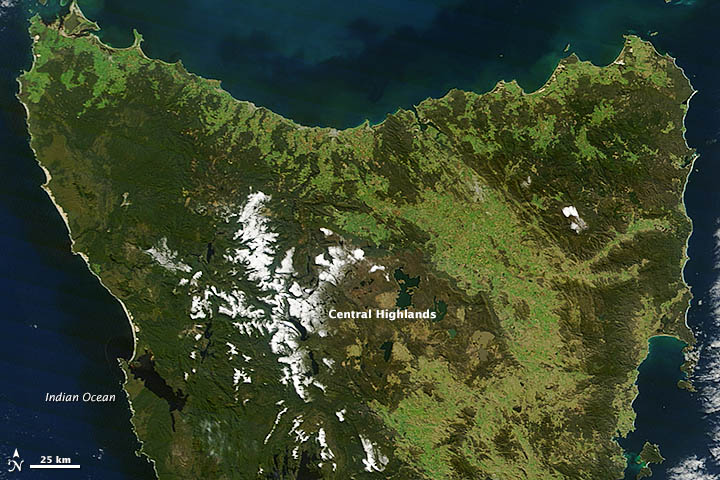 Few things change the appearance of Earth’s land surfaces as readily as a layer of snow. As fall approaches in the Northern Hemisphere and spring arrives in the Southern Hemisphere, snow can quickly transform the greens of vegetation and browns of rock and soil.

On September 4, 2012, the Moderate Resolution Imaging Spectroradiometer (MODIS) on NASA’s Terra satellite acquired this view (top) of snow blanketing the creviced highlands of the Putorana Plateau in central Siberia. The bright white of the snow provides a striking contrast to the brown of the underlying volcanic landscape. A number of narrow lakes, including Lake Khantayskoye, appear dark blue.

The plateau, which lies within the Arctic Circle, is an area where snowfall can occur in early September (northern hemisphere summer, at least astronomically) because of its cool climate and high-elevation. The plateau was formed some 250 million years ago when an enormous mass of magma spilled across the land, depositing a layer of basalt nearly 3,000 meters (10,000 feet) thick. Over time, cracks in the rock filled with water, forming the thin lakes and rivers that define the area. In fact, in the local dialect (Evenki), putorana literally means “lakes with steep shores.” So far, the lakes have not frozen, but they likely will in the coming weeks. (See the frozen lakes in this 2003 image of the same region.)

Thousands of miles away in the southern hemisphere, snow was also visible over Tasmania, a mountainous island southeast of the Australian mainland. On August 31, 2012, the MODIS instrument on Terra acquired an image (bottom) of snow covering the tops of mountains in Tasmania’s Central Highlands, where the tallest peaks stand at 1,700 meters (5,600 feet). The swath of lighter green to the east of the highlands, known as the Midlands, is comprised of grasslands that are well-suited for agriculture. The darker green area to the southwest is a heavily forested and remote region where temperate rainforests thrive.

Although the snow in the two images looks similar, to a trained specialist like NASA scientist James Foster, subtle differences emerge. “Because the snow in Siberia is likely fresh and probably fell at night, the snowline is nearly the same elevation throughout the scene,” Foster noted. “There’s no melting on southern and western slopes. The snowline is definitely temperature-controlled, and there is no snow below a certain elevation. This is not the case in the Tasmania image, where the snow pack has had an opportunity to melt.”

The Terra satellite captured images of snow in opposite hemispheres in the same week.