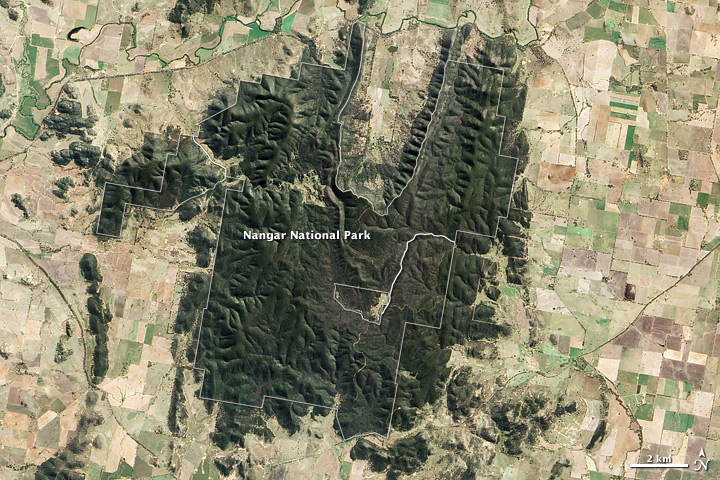 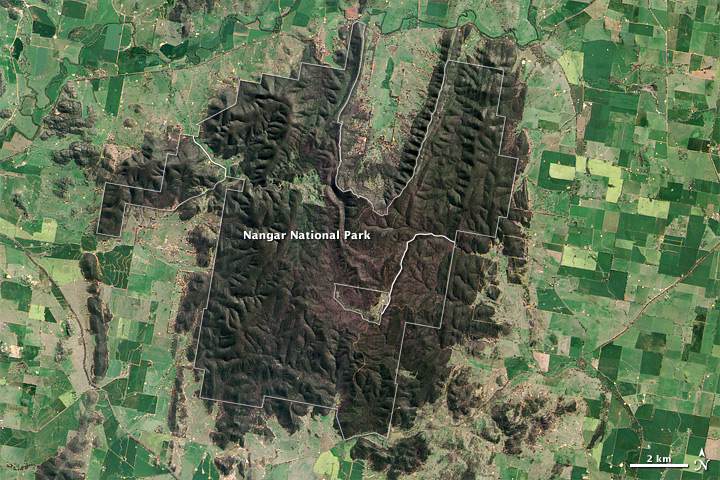 Located in New South Wales, Australia’s Nangar National Park rises from the surrounding plain. Although the western portion of the park features gentle slopes and wide valleys, the park’s northern reaches are filled with peaks, cliffs, and gorges in a zone of deeply folded and faulted ancient rocks. A winding line of cliffs marks the park’s northern margin, where Mount Nangar stretches 770 meters (2,530 feet) above sea level.

This park landscape has been a boon to native vegetation mostly because the rugged land was too much trouble for farmers and ranchers to clear. So while the low-lying landscape around the park is cultivated for agriculture, native vegetation has persisted inside the park—resembling a giant hoof print of dark green.

From the perspective of a satellite, the seasons appear to bring greater changes to the surrounding rectangular farm plots than to the park. The Advanced Land Imager (ALI) on NASA’s Earth Observing-1 (EO-1) satellite captured the top image on April 28, 2012 (in the Southern Hemisphere autumn), and the bottom image on September 7, 2010 (spring).

For more than a decade, a drought parched southeastern Australia. But by September 2010, the Australian Bureau of Meteorology (BOM) reported cool temperatures and plentiful rains—following several months of above-average rainfall—that eased the drought in New South Wales. As a result, fresh green vegetation carpeted the region.

On average, precipitation amounts are roughly equal in April and September in Nangar National Park, between 40 and 50 millimeters (1.6 and 2.0 inches). Temperatures are slightly higher in April: 25 degrees Celsius (75 degrees Fahrenheit) compared to September’s 20 degrees Celsius (70 degrees Fahrenheit). The BOM reported that in April 2012, however, rainfall was below average and temperatures were above average. The BOM viewed the April 2012 weather as a return to drier conditions after the departure of La Niña. The different appearance of the fields around Nangar National Park likely resulted both from harvest season and the warmer, drier conditions.

Inside the park, green persists across the seasons. Park vegetation is a mixture of trees and shrubs, the understory providing a profusion of color when plants are in flower. Biologists have classified the park vegetation as dry sclerophyll forest. Plants in these ecosystems are well adapted to low soil fertility and sparse rainfall. 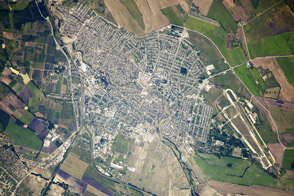