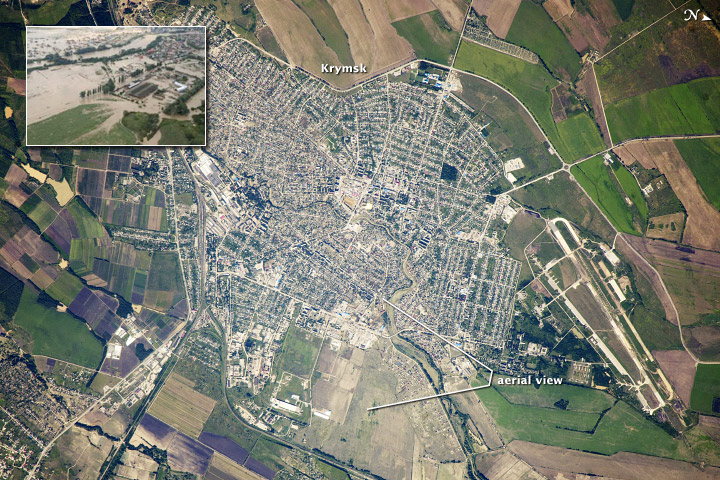 On the night of July 7, 2012, a major storm dumped more than a foot (30 centimeters) of water on the Krasnodar area of southern Russia, near the Black Sea. The resulting flood was likened to a tsunami, and to date more than 170 people have died, most in the city of Krymsk. The Moscow Times reports that more than 19,000 people lost everything.

This image, taken by cosmonauts aboard the International Space Station, shows the city of Krymsk on July 10, 2012. For context, an aerial view from July 7 (inset) shows the flooding of the Kuban River tributary, which flows through the center of the city. Regions that were flooded along the channel have tan to brown color in the ISS image, likely due to the mud and debris that was left behind by the floodwaters.

Krymsk is located in the western foothills on the northern slope of the Caucasus Mountains, a range that stretches between the Black Sea and the Caspian Sea. The vast amount of rain quickly overwhelmed the small river channels that flow north from the mountains to the Russian lowlands and the Kuban River. Krymsk was directly in the pathway of the flash flood.

As part of the international partner agreement to use the International Space Station to benefit humanity, crew members and other Earth observing instruments provide support to the International Disaster Charter (IDC) by collecting imagery of areas impacted by natural events such as flooding. Data may be accessed through the IDC web site’s Charter Geographic Tool for use in relief efforts or to communicate more clearly the geographic impacts of events through annotated maps.

Astronaut photograph ISS032-E-6129 was acquired on July 10, 2012, with a Nikon D3X digital camera using a 1200 mm lens, and is provided by the ISS Crew Earth Observations experiment and Image Science & Analysis Laboratory, Johnson Space Center. The aerial view of Krymsk was taken on July 7 and was credited by The Moscow Times to Russian Governor Tkachyov of the Krasnodar region. The ISS image was taken by the Expedition 32 crew. It has been cropped and enhanced to improve contrast, and lens artifacts have been removed. The International Space Station Program supports the laboratory as part of the ISS National Lab to help astronauts take pictures of Earth that will be of the greatest value to scientists and the public, and to make those images freely available on the Internet. Additional images taken by astronauts and cosmonauts can be viewed at the NASA/JSC Gateway to Astronaut Photography of Earth. Caption by Cynthia A. Evans, NASA-JSC. 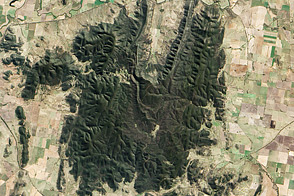 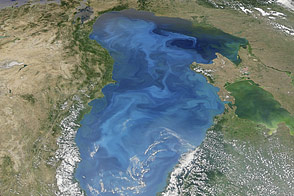 The approximate boundary between Europe and Asia is defined by the Ural River and the Ural Mountains to its north. The Ural River flows to the great inland Caspian Sea and gives its name to the city of Uralsk on its banks. International Space Station astronauts acquired a series of images of Uralsk, highlighting the city under different lighting conditions. This view shows the sunglint (light reflected from the water surface towards the observer) on the rivers, lakes, and ponds of the Ural flood plain (right side of image) and that of a tributary, the Chogan River (bottom). The cityscape of Uralsk, on the headland between the two, is relatively difficult to see because the water and sunglint dominate the scene.

Taken on May 22, 2010, this astronaut photograph shows flooding along the Vistula River near the towns of Gorzyce, Sokolniki, and Trześń.