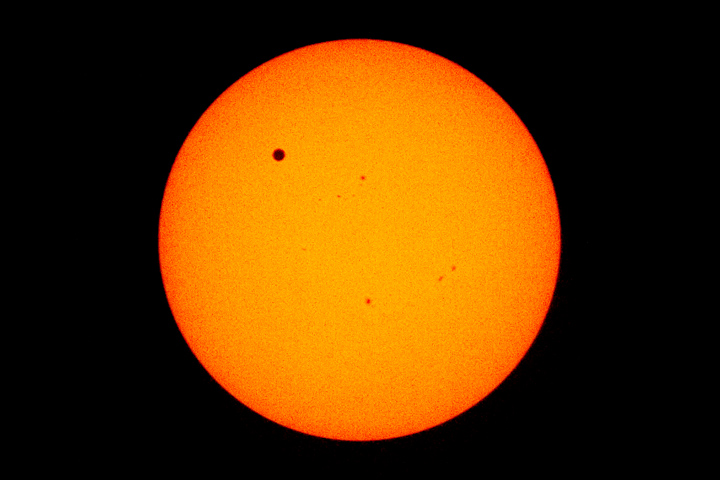 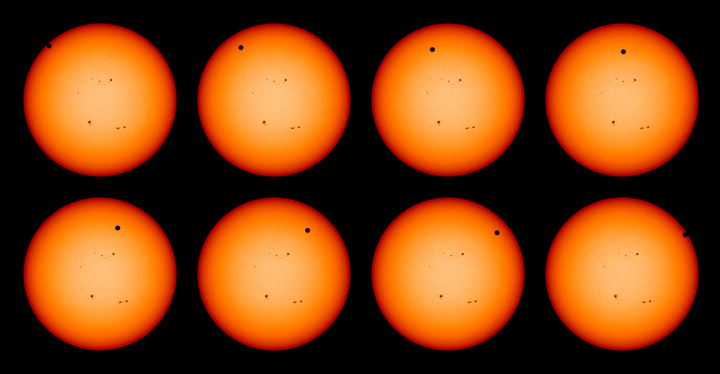 Observations of the Transit of Venus during the 17th, 18th, and 19th centuries allowed scientists to calculate the distance between the Earth and the Sun, while revealing the existence of an atmosphere around Venus. Since the previous pair of transits of Venus in 1874 and 1882, humans have developed the ability to view the phenomena from space—both directly from low-Earth orbit and remotely from sensors on spacecraft collecting data about the Sun.

Astronaut Don Pettit, flight engineer for International Space Station (ISS) Expedition 31, was particularly keen to take photos of the event from orbit—even bringing a solar camera filter aboard for the event. This top image, from the first half of the 2012 transit, is one of hundreds taken from the ISS Cupola, a windowed module that provides the crew with unparalleled views of both Earth and astronomical phenomena. In fact, history will record the ISS as the first orbital, crewed spacecraft from which the Transit of Venus has been observed. In addition to the dark circle of Venus visible at image upper left, several smaller sunspots are visible at image center.

The eight-image series (lower) comes from one of those solar-observing spacecraft: NASA’s Solar Dynamics Observatory (SDO). The full-disk images were captured between 21:00 Universal Time on June 5 and 06:00 UTC on June 6 by the Helioseismic and Magnetic Imager (HMI), an instrument designed to study the oscillations and magnetic field of the solar surface, or photosphere. As with Pettit’s photo, HMI reveals several sunspots near the middle of the Earth-facing side of the Sun, as well as the larger, transient disk of Venus in the upper third of the images. A movie showing the entire Transit is available for download by clicking on the link below the image or by visiting our YouTube channel. The SDO team also produced a montage of high-definition views of the Transit that you can see here.

The Transit of Venus in front of the Sun is one of only two such planetary crossings—the other being the Transit of Mercury—that are visible from Earth. While transits of Mercury occur thirteen times each century, Venus transits the Sun only twice over the same time period. (The first transit of the current pair occurred in 2004). Unless you are fortunate enough to be at locations where the transit is visible both times, this makes the Transit of Venus a true “once in a lifetime” event.

Astronaut photograph ISS031-E-89012 was acquired on June 6, 2012, with a Nikon D2Xs digital camera using an 800 mm lens, and is provided by the ISS Crew Earth Observations experiment and Image Science & Analysis Laboratory, Johnson Space Center. The image was taken by the Expedition 31 crew. It has been cropped and enhanced to improve contrast, and lens artifacts have been removed. SDO animation by Robert Simmon, using data from the Helioseismic and Magnetic Imager on the Solar Dynamics Observatory. Caption by William L. Stefanov, Jacobs/ESCG at NASA-JSC, and Mike Carlowicz, Earth Observatory.