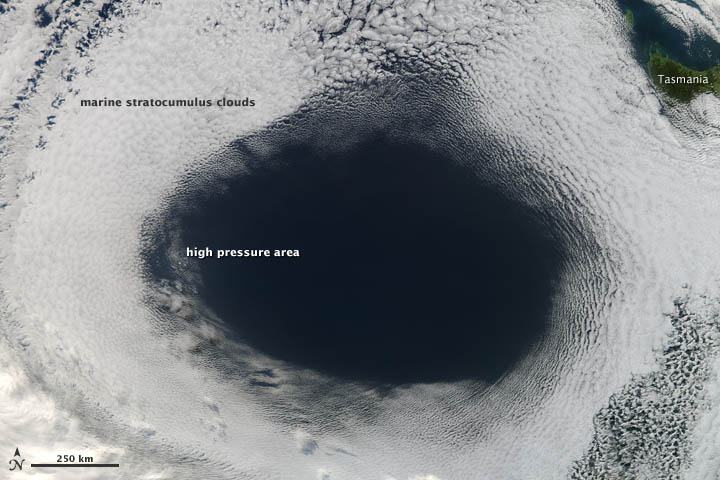 The Moderate Resolution Imaging Spectroradiometer (MODIS) on NASA’s Aqua satellite acquired this view of a hole in a cloud formation at 3:00 p.m. local time (05:00 Universal Time) on June 5, 2012. The weather system over the Great Australian Bight cut out the oval-shaped hole from a blanket of marine stratocumulus clouds.

The cloud hole, with a diameter that stretched as far as 1,000 kilometers (620 miles) across, was caused by sinking air associated with an area of high pressure near the surface. Globally, the average sea-level pressure is about 1013 millibars; at the center of this high, pressures topped 1,040 millibars.

In general, winds blow outward and away from areas of high pressure. As a result, areas of high pressure pull air downward. As the air sinks, it also warms, increasing the rate of evaporation and making it difficult for the air to sustain clouds. Areas of low pressure, by contrast, pull air upward and generate clouds and stormy weather.