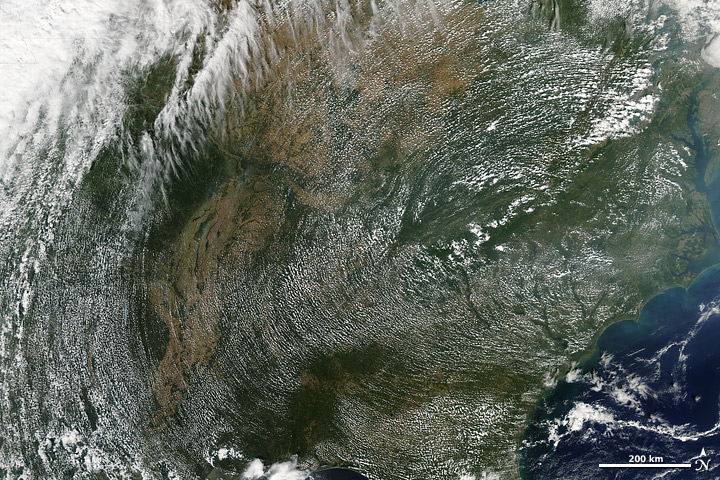 High-pressure weather systems often bring fair weather and relatively clear skies. On September 23, 2010, they also made for atmospheric art. The Moderate Resolution Imaging Spectroradiometer (MODIS) on NASA’s Aqua satellite captured this view of a high pressure system dominating the eastern half of the United States at 3:05 p.m. Eastern Daylight Time (19:05 UTC) on September 23, 2010.

The circular pattern to the clouds—stretching from Ohio to Florida and from Arkansas to the Atlantic Coast—was caused by the flow of air around a sprawling high-pressure ridge centered in western Virginia, North Carolina, and eastern Tennessee. In meteorology, high pressure ridges form where air is sinking from high altitudes toward Earth's surface. The descending air flows out from the center in clockwise spirals in the northern hemisphere and counter-clockwise in the southern hemisphere.

The relatively low-level cumulus clouds (below 15,000 feet) shown in this image are likely the product of moisture near ground level being cooked by the Sun and convected into the lower atmosphere. Because the winds at that level are pretty strong, the clouds aligned parallel to the direction of wind flow, in “streets” curving along with the flow of the high-pressure system.

“To have convective clouds in such a strong flow is a bit unusual in the summer or even early fall,” said NASA atmospheric researcher Tom Arnold, “since winds at that level tend to be weaker in the summer months. It's a sight more common to large cold air outbreaks in the winter over the warm Gulf Stream waters.”

The heavier cloud cover to the north and west of this circular pattern was likely a response to a low-pressure system and to jet stream dynamics. The flow around the western side of the high and eastern edge of the low drew abundant moisture from the Gulf of Mexico.