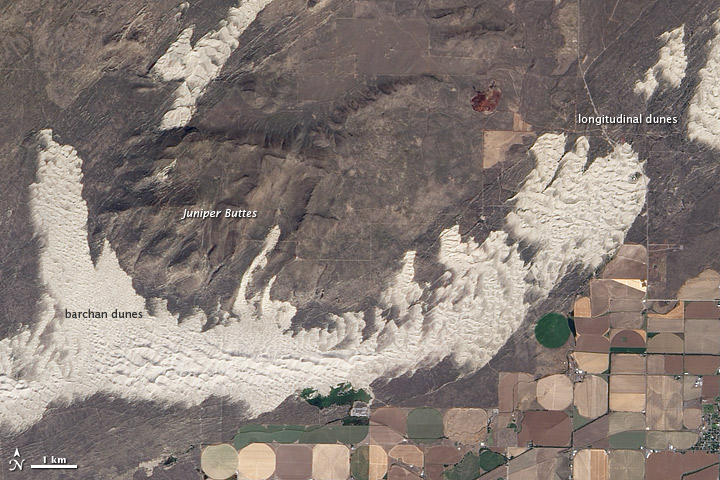 Driving down Highway 20 from Idaho Falls toward Yellowstone National Park, green and golden fields flash past the car windows, interrupted only briefly by small towns. Turn off the highway in one of those towns, St. Anthony, cross the Snake River, and the farms give way abruptly to mountains of fine, white sand more akin to the Sahara Desert than the fertile Snake River Plain. The out-of-place dunes hint at a time when the climate of eastern Idaho was far different than it is today.

The dunes spill across the Snake River Plain in a wide arc in this detailed, photo-like image acquired by the Advanced Land Imager on NASA’s EO-1 satellite on September 25, 2010. Freshly harvested fields line the southern boundary of the dunes, and to the north is a darker brush-covered lava plain.

The dunes formed about 10,000 years ago, at the end of the last ice age when the Earth’s climate shifted. Eastern Idaho’s climate became warmer and drier. Lakes shrank, exposing fine sand. Persistent winds from the southwest blew the sand northeast across the lava plain visible in the lower left corner of the image.

Dunes form only when sand encounters a soft surface or obstacle that prevents it from blowing away. The St. Anthony Dunes began to form when the sand reached the weathered mass of the Juniper Buttes, extinct volcanoes. Each individual dune forms a curve, with ends pointing northeast in the direction of the wind. This type of dune is a barchan dune, Arabic for ram’s horn.

East of the volcanoes, the sand encountered another obstacle that kept it in place: more dunes. These older dunes, longitudinal dunes, are plant-covered sand dunes that formed in a previous, more arid climate, says Idaho State University geologist Paul Link. The longitudinal dunes formed on top of an old flood plain, from a branch of the Snake River, probably from sand blown from the river’s bank. The longitudinal dunes are long, dark stripes under the newer brilliant white dunes—layers of climate history visible at a glance.

White sand dunes spill across the Snake River Plain in a wide arc in this detailed, photo-like image acquired by the Advanced Land Imager on NASA’s EO-1 satellite on September 25, 2010.