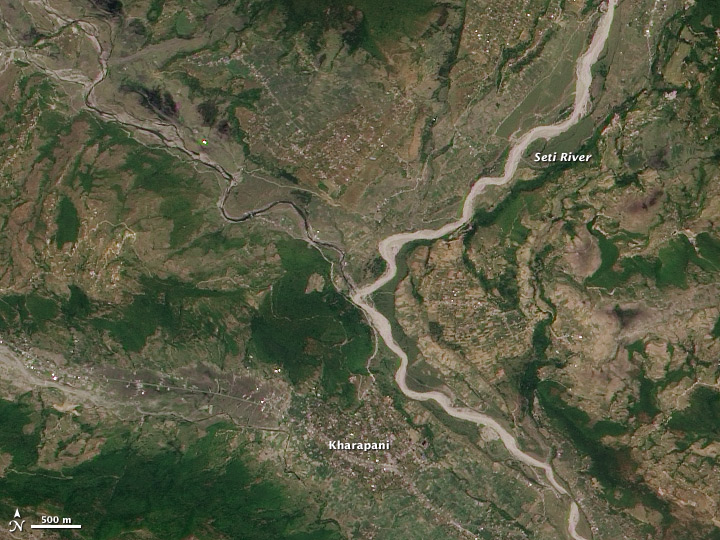 Fresh, light-colored debris filled the channel of Nepal’s Seti River after a catastrophic flood and debris flow on May 5, 2012. The flow was triggered by a rockfall high in the Himalaya, about 29 kilometers (18 miles) away. The landslide occurred on a nearly vertical cliff face just south of Annapurna IV’s 7,525-meter (24,688-foot) summit. Debris from the landslide fell a total of over 3,400 meters (11,000 feet) into the headwaters of the Seti River.

It is likely that this landslide triggered the floods downstream. As it dropped, the landslide gathered momentum, and collected any loose material in its path. This included remnants of earlier rockfalls, snow, ice, and glacial flour (rock ground into a fine powder by the region’s high-altitude glaciers). Friction in the falling mass may have melted much of the ice. Steep ravines then channeled some of the material into the Seti River, forming a fast-moving debris flow—a mixture of mud, sand, gravel, and rocks, saturated with water (which lubricated the flow). Observers described the flow of the mud-choked river as “thick” and “like a swampland.”

After the initial surge, the Seti River crested 20 or more times, reflecting the series of pulses typical of a debris flow. Flooding extended past Pokhara, 10 kilometers (6 miles) downstream of Kharapani. The total drop in elevation from the Annapurna IV ridgeline to the bed of the Seti River below Pokhara is about 6,100 meters (20,000 feet)—more relief than anywhere in the continental United States—over a distance of only 40 kilometers (25 miles).

An earlier landslide that developed in the upper reaches of the Seti River Valley in March and April may have contributed to the severity of the debris flow that reached Pokhara. If the original landslide dammed the Seti, forming a small lake, a sudden surge of water and rock from upstream could breach the dam, resulting in a larger, combined flood.

This image, collected by the Advanced Land Imager (ALI) aboard the Earth Observing-1 (EO-1) satellite on May 20, 2012, shows remnants of the debris flow. A light gray layer of mud, silt, and rocks left behind covers the course of the Seti River. In contrast, the channel of a tributary that joins the Seti near Kharapani is much darker. It probably resembles the pre-flood Seti River: a narrow river flanked by a partially vegetated floodplain.

The landscape in this part of Nepal is shaped by a cycle of landslides and subsequent erosion. As the tectonic collision of India with Asia pushes the Himalaya upward, ice, water, and gravity, assisted by sporadic earthquakes, combine to grind the mountains down. The channel of the Seti River itself is cut into the remnants of a much larger debris flow, perhaps 1,000 times as big. 60 to 100 meters (200–330 feet) thick, the landslide deposits are composed of the same limestone as the peaks to the north. Likewise, the May 2012 flow left behind jagged fragments of limestone, carried from the crest of the Himalaya to the foothills in a single event.

[Initial reports suggested that the May 5, 2012 Seti River debris flow was the result of a glacial lake outburst flood. However, there was no large glacial lake in the headwaters of the Seti, and the Annapurna IV landslide occurred only 40 minutes before flooding was reported, indicating that the Landslide triggered the debris flow.]

Thanks to Colin Stark and David Petley for their invaluable help interpreting this event.

Twenty months after a slurry of debris swamped villages and killed dozens of people, scientists have pieced together the events that caused the deadly flood.