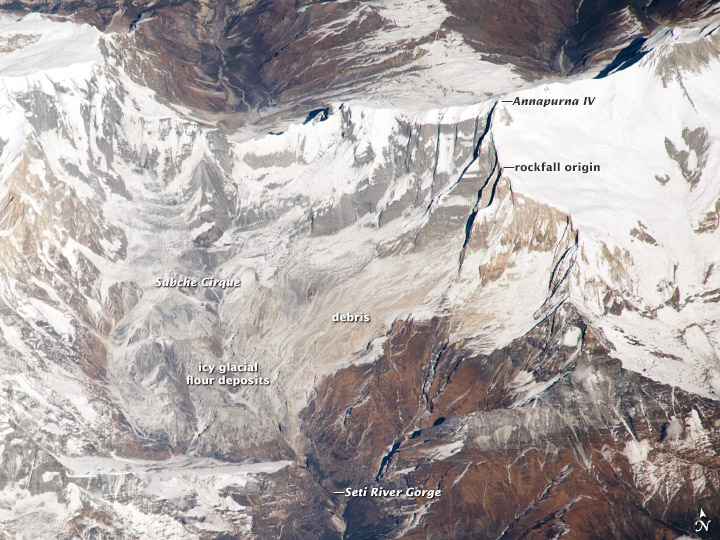 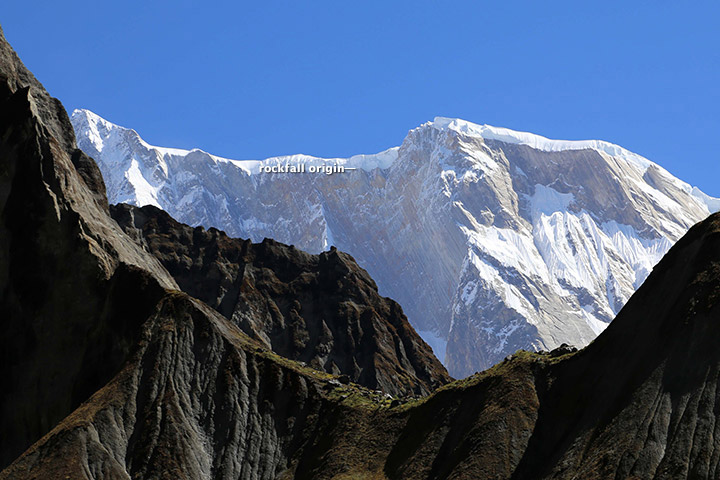 The first sign of trouble for residents along the upper Seti River in Nepal was the water. In late April and early May 2012, what was usually a roaring river had slowed to a trickle. And the milky-white water—colored by rock flour from glaciers upstream in the Sabche Cirque—had turned blue and clear.

Residents regarded the river changes as bizarre, but nobody connected the slowdown to anything dangerous upstream. So it came as a surprise when a slurry of sediment, rock, and water suddenly surged through the valley on May 5, 2012, obliterating dozens of homes and sweeping 72 people to their deaths. In the chaotic aftermath of the flood, questions swirled about where the water had come from and how it had arrived with so little warning.

Had a natural dam formed and then abruptly burst? Had debris from a rockslide dammed the Seti into a glacial lake and then failed? Had water long trapped in subterranean caves found its way out? Did an avalanche high on Annapurna triggered the deluge? “There were all sorts of theories in the beginning, but they were mostly speculation,” said Jeffrey Kargel, a University of Arizona hydrologist who has been studying the disaster. “We didn’t have hard data from the field that could prove or disprove most of them.”

Now they have that data. Twenty months after the disaster, experts like Kargel have made enough observations in the field, conducted enough tests in the lab, and analyzed enough satellite data to say quite definitely what happened. He has concluded that it was not just one event but a series of them that combined to produce the devastation.

It began weeks before the flood with a series of rockfalls that sent debris tumbling into the Seti River, backing water up in the extremely deep and narrow gorge. The last of these landslides occurred just a week or so before the flood. The situation grew dire on May 5, 2012, when an unusually powerful ice avalanche and rockfall tumbled down a vertical cliff on a ridge just south of Annapurna IV. The total drop from the Annapurna IV ridgeline to the bed of the Seti is about 6,100 meters (20,000 feet) spread over a distance of only 40 kilometers (25 miles)—more relief than anywhere in the continental United States.

“You can imagine what an enormous amount of force accompanied the avalanche,” said Kargel. “It was so powerful that huge amounts of snow melted due to the friction, and it produced a blast of hurricane-force winds that flattened old-growth forests near the Seti River Gorge.” As the force of the avalanche and winds poured into the gorge, it overwhelmed the natural dam created by the earlier rockslides. The dam burst and sent a surge of pent up water and avalanche debris rushing downstream.

Evidence of the massive rockfall and avalanche was still visible on December 22, 2013, when an astronaut on the International Space Station snapped a photograph (top) showing debris still coating the slopes below Annapurna IV. Next to the snow-covered slopes of the cirque, the debris-covered surfaces appear tan. The second image, a photograph by Kargel, shows the vertical cliff where the avalanche began.

Kargel’s research group has taken four separate trips to the area since 2012. In the process of piecing together how the disaster occurred, the team also analyzed whether a similar event could occur in the future. “There are good reasons to be concerned,” he said. “Something like this will happen again. It’s inevitable.”

His rationale? The Seti River Gorge is unusually prone to dangerous blockages because of how narrow and deep it is. And the same processes that triggered the spring 2012 rockfalls and avalanche are still at work. “The only question is whether future events will be as destructive or whether people in the Seti River Valley will have absorbed the lessons of 2012 and found ways to move their homes out of the flood plain.”

Read Kargel’s behind-the-scenes account of his efforts to understand the causes of the disaster in our Notes from the Field section.

Astronaut photograph ISS038-E-20918 was acquired on November 16, 2013, with a Nikon D3X digital camera using a 1000 millimeter lens, and is provided by the ISS Crew Earth Observations experiment and Image Science & Analysis Laboratory, Johnson Space Center. The image was taken by the Expedition 38 crew. It has been cropped and enhanced to improve contrast, and lens artifacts have been removed. The International Space Station Program supports the laboratory as part of the ISS National Lab to help astronauts take pictures of Earth that will be of the greatest value to scientists and the public, and to make those images freely available on the Internet. Additional images taken by astronauts and cosmonauts can be viewed at the NASA/JSC Gateway to Astronaut Photography of Earth. Caption by Adam Voiland.

Twenty months after a slurry of debris swamped villages and killed dozens of people, scientists have pieced together the events that caused the deadly flood.