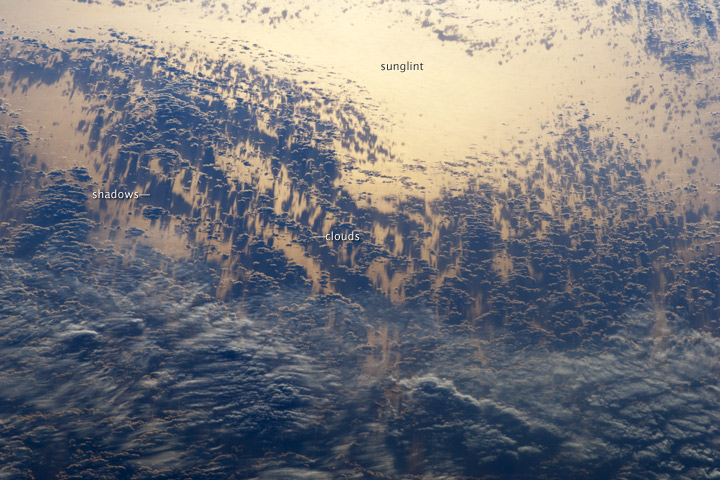 The setting sun highlights cloud patterns—as well as the Pacific Ocean surface itself—in this photograph taken by an astronaut on the International Space Station. The ISS was located over the Andes Mountains of central Chile at the time. The camera view is looking back towards the Pacific Ocean as the Sun was setting in the west (towards the upper right). Light from the setting Sun reflects off the water surface and creates a mirror-like appearance, a phenomenon known as sunglint.

Bands of relatively low-altitude cumulus clouds appear like a flotilla of ships, with west-facing sides illuminated by waning sunlight and the rest of the clouds in shadow. Due to the low Sun angle, the clouds cast long and deep shadows over large swaths of the ocean. Given the short camera lens used, an individual cloud shadow may extend for miles. Light gray clouds at image lower left appear to be at a higher altitude. The cloud cover is likely a remnant of a frontal system that moved in from the Pacific and over inland South America a day or two prior to when the image was taken.

Astronaut photograph ISS031-E-35310 was acquired on May 15, 2012, with a Nikon D2Xs digital camera using a 180 mm lens, and is provided by the ISS Crew Earth Observations experiment and Image Science & Analysis Laboratory, Johnson Space Center. The image was taken by the Expedition 31 crew. It has been cropped and enhanced to improve contrast, and lens artifacts have been removed. The International Space Station Program supports the laboratory as part of the ISS National Lab to help astronauts take pictures of Earth that will be of the greatest value to scientists and the public, and to make those images freely available on the Internet. Additional images taken by astronauts and cosmonauts can be viewed at the NASA/JSC Gateway to Astronaut Photography of Earth. Caption by William L. Stefanov, Jacobs/ESCG at NASA-JSC. 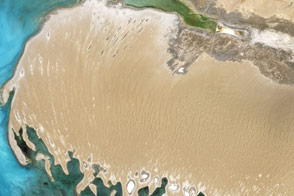