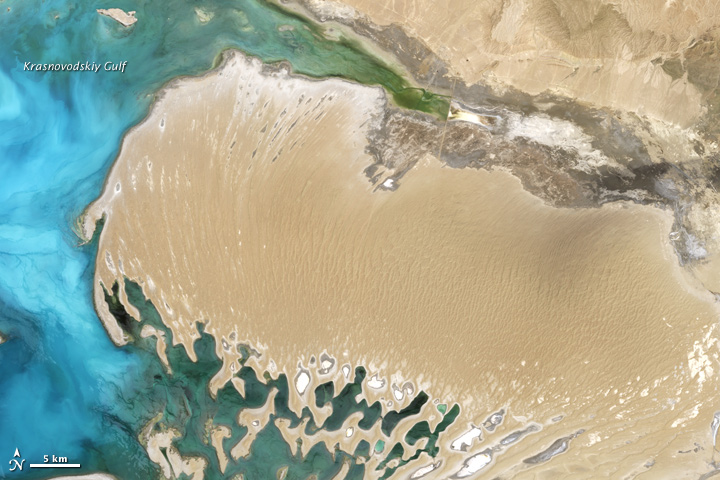 Part of a country mostly covered by desert, the Dardzha Peninsula lies along the shore of the world’s most expansive inland water body. Pushing westward into the Caspian Sea from Turkmenistan’s Garagum (Karakum) Desert, the Dardzha Peninsula is a landscape of sand dunes and salt flats. The Enhanced Thematic Mapper Plus on the Landsat 7 satellite acquired this natural-color image of the peninsula on June 16, 2000.

Dunes on the peninsula are long, linear features stretching mostly north-south. Toward the east, the dunes transition to level, sandy plains. Along the peninsula’s southern edge lies a network of partially submerged dunes, interspersed with shallow, salty lakes. These dunes separate the Dardzha from a neighboring peninsula, the Cheleken.

A river known as the Uzboy used to flow through the Garagum Desert toward the Caspian Sea. Exactly when the river dried up is a matter of debate, but when the river was active, its estuaries periodically flooded. The flooding deposited vast quantities of sand, eventually forming the Dardzha Peninsula. Today, winds blowing over the Garagum Desert can pick up dust that is later deposited on arable lands of the Volga River Valley, impeding agriculture.

Partially driven by human activities such as river damming, falling water levels in the Caspian Sea contributed to the buildup of silt on the Dardzha Peninsula, especially after 1960. The average surface level of the Caspian is 27 meters (89 feet) below sea level. In the late nineteenth century, the water level started falling, bottoming out in the late 1970s before rebounding. During the long period of declining water levels, people around the Caspian Sea grew accustomed to the low water, so when water began rising, it displaced some settlements and infrastructure that had developed along the shores. The Dardzha Peninsula, however, rarely supported much human activity, its salty soils being unsuitable for agriculture, grazing, or big structures. 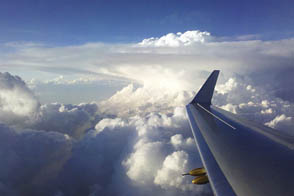