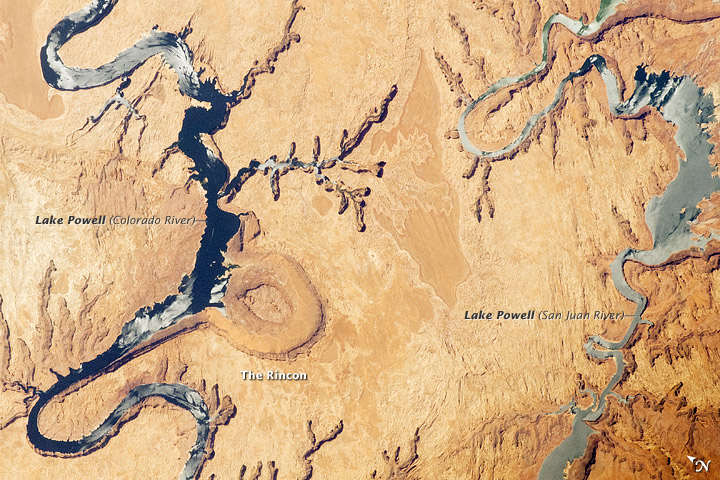 This astronaut photograph highlights part of Lake Powell, which extends across southeastern Utah and northeastern Arizona. Lake Powell started filling in 1963 when the Glen Canyon Dam was completed along the Colorado River in Arizona, and the canyon was flooded. The serpentine surface of the reservoir—highlighted by gray regions of sunglint—follows the incised course of the canyon, which was cut downwards into the existing rock layers by the erosive power of the river. The two branches shown in the image are connected by a bend to the southwest (not shown).

Lake Powell is part of the Glen Canyon National Recreation Area, which extends for more than 300 kilometers (186 miles) along the shoreline and side canyons. The primary intended use of Lake Powell’s water is support for agriculture, with a small portion allocated to urban use in Arizona, Nevada, and California.

The reservoir did not reach its maximum capacity of 27 million acre-feet until 1980. More recently, extended drought conditions in the southwestern United States have resulted in a significant lowering of the lake water level and the emergence of formerly submerged parts of Glen Canyon. Should average precipitation in the Colorado River watershed decrease (as predicted by regional climate change models), that could result in further lowering of Lake Powell and changes to the water management plans.

Fluctuations in water levels and changes in river courses are a common occurrence in the geologic record of rivers. Looking somewhat like a donut or automobile tire from the vantage point of the International Space Station, The Rincon (image center) is an entrenched and abandoned meander, or loop, of the Colorado River. Scientists believe it formed several thousand years ago when the river cut straight across the ends of the loop and shortened its course by six miles. The resulting canyon and 600 to 750 feet-high central mesa indicate where the river used to flow.

The term “rincon” also is used by geomorphologists to describe similar ancient river features observed elsewhere. The Goosenecks of the San Juan River are an example of an active entrenched meander.

Astronaut photograph ISS031-E-6398 was acquired on April 30, 2012, with a Nikon D2Xs digital camera using a 400 mm lens, and is provided by the ISS Crew Earth Observations experiment and Image Science & Analysis Laboratory, Johnson Space Center. The image was taken by the Expedition 31 crew. It has been cropped and enhanced to improve contrast, and lens artifacts have been removed. The International Space Station Program supports the laboratory as part of the ISS National Lab to help astronauts take pictures of Earth that will be of the greatest value to scientists and the public, and to make those images freely available on the Internet. Additional images taken by astronauts and cosmonauts can be viewed at the NASA/JSC Gateway to Astronaut Photography of Earth. Caption by William L. Stefanov, Jacobs/ESCG at NASA-JSC.